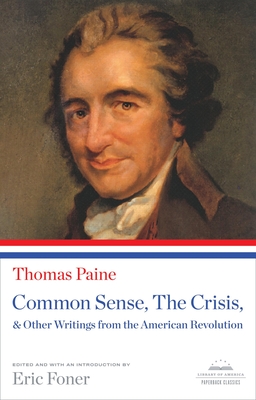 Common Sense, The Crisis, & Other Writings from the American Revolution

After a life of obscurity and failure in England, Thomas Paine came to America in 1774 at age 37. Within fourteen months he published Common Sense, the most influential pamphlet of the American Revolution, and began a career that would see him hailed and reviled in the American nation he helped create.

Collected in this volume are Paine's most influential texts. In Common Sense, he sets forth an inspiring vision of an independent America as an asylum for freedom and an example of popular self-government in a world oppressed by despotism and hereditary privilege. The American Crisis, begun during “the times that try men’s souls” in 1776, is a masterpiece of popular pamphleteering in which Paine vividly reports current developments, taunts and ridicules British adversaries, and enjoins his readers to remember the immense stakes of their struggle. They are joined in this invaluable reader by a selection of Paine’s other American pamphlets and his letters to George Washington, Thomas Jefferson, and others.

Eric Foner is DeWitt Clinton Professor of History at Columbia University and the author of Tom Paine and Revolutionary America, among many other works. His most recent book, The Fiery Trial: Abraham Lincoln and American Slavery won the Pulitzer, Bancroft, and Lincoln prizes for 2011.

Thomas Paine was a preeminent political activist and theorist, philosopher, and revolutionary whose pamphlets Common Sense and The American Crisis rank among the most influential writings of the American Revolutionary War.
Loading...
or support indie stores by buying on