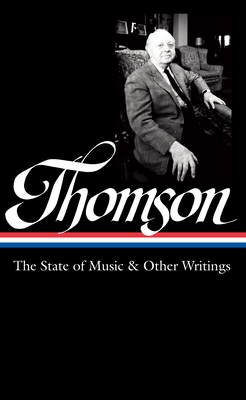 A Pulitzer Prize–winning music critic presents an unprecedented collection of the writings of the great composer-critic and father of American classical music, Virgil Thomson

Following on the critically acclaimed edition of Virgil Thomson’s collected newspaper music criticism, The Library of America and Pulitzer Prize–winning music critic Tim Page now present Thomson’s other literary and critical works, a body of writing that constitutes America’s musical declaration of independence from the European past. This volume opens with The State of Music (1939), the book that made Thomson’s name as a critic and won him his 14-year stint at the New York Herald Tribune. This no-holds-barred polemic—here presented in its revised edition of 1962—discusses the commissions, jobs, and other opportunities available to the American composer, a worker in a world of performance and broadcast institutions that, today as much as in Thomson’s time, are dominated by tin-eared, non-musical patrons of the arts who are shocked by the new and suspicious of native talent.

Thomson’s autobiography, Virgil Thomson (1966), is more than just the story of the struggle of one such American composer, it is an intellectual, aesthetic, and personal chronicle of the twentieth century, from World War I–era Kansas City to Harvard in the age of straw boaters, from Paris in the Twenties and Thirties to Manhattan in the Forties and after. A classic American memoir, it is marked by a buoyant wit, a true gift for verbal portrait-making, and a cast of characters including Aaron Copland, Gertrude Stein, James Joyce, Paul Bowles, John Houseman, and Orson Welles. American Music Since 1910 (1971) is a series of incisive essays on the lives and works of Ives, Ruggles, Varèse, Copland, Cage, and others who helped define a national musical idiom. Music with Words (1989), Thomson’s final book, is a distillation of a subject he knew better than perhaps any other American composer: how to set English—especially American English—to music, in opera and art song. The volume is rounded out by a judicious selection of Thomson’s magazine journalism from 1957 to 1984—thirty-seven pieces, most of them previously uncollected, including many long-form review-essays written for The New York Review of Books.

TIM PAGE, editor of the two-volume Library of America Virgil Thomson edition, won the 1997 Pulitzer Prize for Criticism for his writings in the Washington Post, for which he was a music critic from 1995 to 2008. A professor of music and journalism at the University of Southern California, he is also co-editor of Virgil Thomson’s Selected Letters.
Loading...
or
Not Currently Available for Direct Purchase