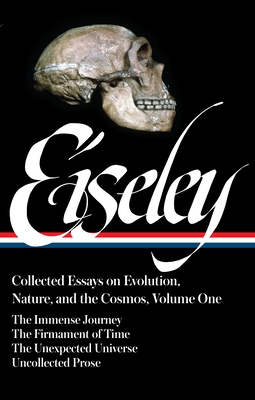 An eminent paleontologist with the soul and skill of a poet, Loren Eiseley (1907–1977) was among the twentieth century’s greatest inheritors of the literary tradition of Henry David Thoreau, Charles Darwin, and John Muir, and a precursor to such later writers as Stephen Jay Gould, Richard Dawkins, and Carl Sagan. After decades of fieldwork and discovery as a “bone-hunter” and professor, Eiseley turned late in life to the personal essay, and beginning with the surprise million-copy seller The Immense Journey (1957) he produced an astonishing succession of books that won acclaim both as science and as art. Now for the first time, the Library of America presents his landmark essay collections in a definitive two-volume set.

This first volume begins with Eiseley’s debut collection, which displays his far-reaching knowledge and boundless curiosity about the mysteries of the natural world. Here are vivid accounts of prehistoric ecosystems, the origins of consciousness, the search for “living fossils” at the bottom of the sea, and the complexities of our evolutionary inheritance. Here too are literary qualities and aspirations that led many to hail Eiseley as a “modern Thoreau”: his quest for the ultimate meanings and cosmological significance of natural phenomena, along with his immense expressive gifts.

The Firmament of Time (1960), a lyrical and meditative tour de force, looks back at the many ways in which the sciences have been shaped by the changing cultures in which they developed. Examining the role of metaphor in scientific thought, anticipations of scientific discoveries in the works of poets and novelists, and the “unconscious conformity” of scientific theory to prevailing orthodoxies, Eiseley argues provocatively for the ongoing relevance to scientific progress of dreams, the imagination, and the irrational.

In his wide-ranging collection The Unexpected Universe (1969), Eiseley turns to the theme of the voyage of discovery: accounts of the mythical and historic journeys of Odysseus, Captain Cook, and Darwin frame his own more modest wanderings in the environs of Philadelphia. Sometimes he travels no farther than the local dump: and yet, like Homer’s hero or these great explorers, he continually finds a universe “not only queerer than we suppose, but queerer than we can suppose.”

As an added feature, this volume presents a selection of Eiseley’s uncollected prose, including early autobiographical sketches, vivid and haunting entries from his private notebooks, and his 1957 lecture “Neanderthal Man and the Dawn of Human Paleontology.”

A companion volume presents The Invisible Pyramid (1970), The Night Country (1971), and the essays gathered after his death in The Star Thrower (1978).

William Cronon, editor, is America’s leading environmental historian. A winner of the MacArthur Fellowship, he is the author of Changes in the Land: Indians, Colonists, and the Ecology of New England (1983) and Nature’s Metropolis: Chicago and the Great West (1991), and currently serves as Frederick Jackson Turner and Vilas Research Professor at the University of Wisconsin–Madison.
Loading...
or support indie stores by buying on