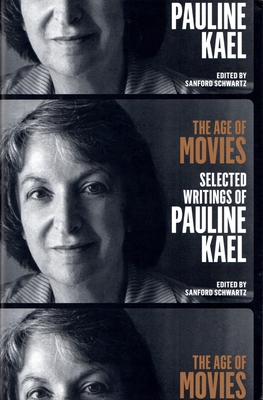 The Age of Movies

A master film critic is at her witty, exhilarating, and opinionated best in this career-spanning collection featuring pieces on Bonnie and Clyde, The Godfather, and other modern movie classics

“Film criticism is exciting just because there is no formula to apply,” Pauline Kael once observed, “just because you must use everything you are and everything you know.” Between 1968 and 1991, as regular film reviewer for The New Yorker, Kael used those formidable tools to shape the tastes of a generation. She had a gift for capturing, with force and fluency, the essence of an actor’s gesture or the full implication of a cinematic image. Kael called movies “the most total and encompassing art form we have,” and her reviews became a platform for considering both film and the worlds it engages, crafting in the process a prose style of extraordinary wit, precision, and improvisatory grace.

Her ability to evoke the essence of a great artist—an Orson Welles or a Robert Altman—or to celebrate the way even seeming trash could tap deeply into our emotions was matched by her unwavering eye for the scams and self-deceptions of a corrupt movie industry. Here are her appraisals of era-defining films such as Breathless, Bonnie and Clyde, The Leopard, The Godfather, Last Tango in Paris, Nashville, along with many others, some awaiting rediscovery—all providing the occasion for masterpieces of observation and insight, alive on every page.

Praise For The Age of Movies: Selected Writings of Pauline Kael: A Library of America Special Publication…

"Pauline Kael was not only one of our greatest film critics, but one of our best nonfiction prose writers. Her range is on brilliant display in this thrilling collection, reminding us what all the excitement was and still is about." — Phillip Lopate

Pauline Kael reached national attention in the 1960s, first in a brief stint as critic for The New Republic, finally as a longtime fixture at The New Yorker (1968-1991). She was considered by many to be the most influential American film critic of the last 50 years. She died in September of 2001.
Loading...
or support indie stores by buying on