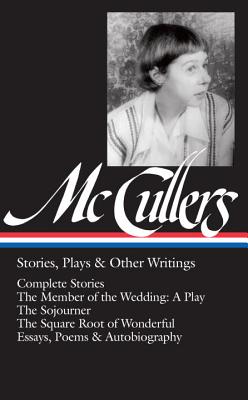 Stories, Plays & Other Writings (LOA #287): Complete stories / The Member of the Wedding: A Play / The Sojourner / The Square Root of Wonderful / essays, poems & autobiography (Library of America Carson McCullers Edition #2)

A landmark gathering of McCullers’ shorter works, including all her published stories, plays, essays, poems, and an unfinished autobiography

Celebrated worldwide for her masterly novels, Carson McCullers was equally accomplished, and equally moving, when writing in shorter forms. This Library of America volume brings together for the first time her twenty extraordinary stories, along with plays, essays, memoirs, and poems. Here are the indelible tales “Madame Zilensky and the King of Finland” and “A Tree. A Rock. A Cloud.” as well as her previously uncollected story about the civil rights movement, “The March”; her award- winning Broadway play The Member of the Wedding and the unpublished teleplay The Sojourner; twenty-two essays; and the revealing unfinished memoir Illumination and Night Glare. This wide-ranging gathering of shorter works reveals new depths and dimensions of the writer whom V. S. Pritchett praised for her “courageous imagination—one that is bold enough to consider the terrible in human nature without loss of nerve, calm, dignity, or love.”

"Of all the Southern writers, she is he most apt to endure. . . . Her genius for prose remains one of the few satisfying achievements of our second-rate culture." —Gore Vidal

"A genius . . . She knows her own original, fearless, and compassionate mind. What she has, before anything else, is a courageous imagination-one that is bold enough to consider the terrible in human nature without loss of nerve, calm, dignity, or love." —V. S. Pritchett

"The most impressive aspect of [her work] is the astonishing compassion that enables a white writer, for the first time in Southern fiction, to handle Negro characters with as much ease and justice as those of her own race. This cannot be accounted for stylistically or politically; it seems to stem from an attitude toward life which enables Mrs. McCullers to rise above the pressures of her environment and embrace white and black humanity in one sweep of apprehension and tenderness." —Richard Wright

Carson McCullers was born Lula Carson Smith in Columbus, Georgia, on February 19, 1917. At the age of nineteen she published her first short story, "Wunderkind," in Story magazine, and soon was contributing fiction to The New Yorker, Harper's Bazaar, and Mademoiselle. She won early critical and commercial success with her first novel, The Heart Is a Lonely Hunter (1940), published when she was only twenty-three. Over the next quarter-century she published four more novels and a collection of short stories, and found Broadway success with her play The Member of the Wedding (produced in 1950). After a series of increasingly debilitating strokes, she died in Nyack, N.Y., in 1967, at the age of fifty.

Carlos L. Dews is the editor of the two-volume Library of America Carson McCullers edition as well a Illumination and Night Glare: The Unfinished Autobiography of Carson McCullers (University of Wisconsin Press, 1999). He is chair of the Department of English Language and Literature at John Cabot University, Rome, and the Director of JCU's Institute for Creative Writing and Literary Translation.
Loading...
or
Not Currently Available for Direct Purchase