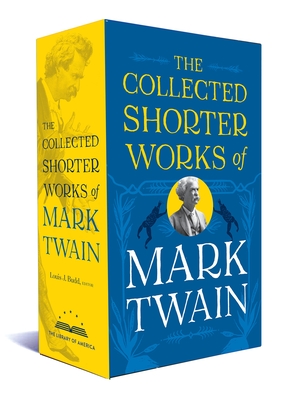 "Against the assault of laughter nothing can stand," Mark Twain once wrote. A master of deadpan hilarity, a storyteller who fashioned an exuberant style rooted in his western origins, and an enemy of injustice who used scathing invective and subtle satire to expose the "humbug" of his time, Twain, like Franklin, Whitman, and Lincoln, helped shape the American language into a unique democratic idiom that was to be heard around the world. Arranged chronologically and containing many pieces restored to the form in which Twain intended them to appear, this deluxe collector's boxed set shows with unprecedented clarity his literary evolution over the six decades of his career. As a riverboat pilot, Confederate irregular, silver miner, frontier journalist, publisher, and internationally acclaimed author, Twain witnessed the tragicomic beginning of the Civil War in Missouri, the frenzied opening of the West, the feverish corruption, avarice, and ambition of the Gilded Age, and the rise of U.S. imperialism. He wrote about political bosses, jumping frogs, robber barons, cats, women's suffrage, temperance, petrified men, the bicycle, the Franco-Prussian War, the telephone, the income tax, the insanity defense, injudicious swearing, and the advisability of political candidates preemptively telling the worst about themselves before others get around to it. This is the quintessential Mark Twain.

Praise For The Collected Shorter Works of Mark Twain: A Library of America Boxed Set…

"These sketches and stories are a national treasure. The Library of America ought to be commended for issuing them in an attractive edition." -- The Dallas Morning News

Volume editor Louis J. Budd (1921-2010) was professor of English at Duke University and the author of Our Mark Twain: The Making of His Public Personality.
Loading...
or
Not Currently Available for Direct Purchase