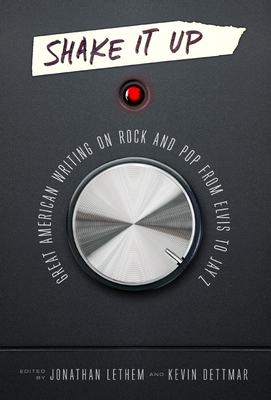 The essential playlist of great writing about the music that rocked America, with fifty landmark pieces on Otis Redding, Janis Joplin, Lez Zepplin, and other rock n’ roll legends

Jonathan Lethem and Kevin Dettmar's Shake It Up invites the reader into the tumult and excitement of the rock revolution through fifty landmark pieces by a supergroup of writers on rock in all its variety, from heavy metal to disco, punk to hip-hop. Stanley Booth describes a recording session with Otis Redding; Ellen Willis traces the meteoric career of Janis Joplin; Ellen Sander recalls the chaotic world of Led Zeppelin on tour; Nick Tosches etches a portrait of the young Jerry Lee Lewis; Eve Babitz remembers Jim Morrison. Alongside are Lenny Kaye on acapella and Greg Tate on hip-hop, Vince Aletti on disco and Gerald Early on Motown; Robert Christgau on Prince, Nelson George on Marvin Gaye, Luc Sante on Bob Dylan, Hilton Als on Michael Jackson, Anthony DeCurtis on the Rolling Stones, Kelefa Sanneh on Jay Z.

The story this anthology tells is a ongoing one: “it’s too early,” editors Jonathan Lethem and Kevin Dettmar note, “for canon formation in a field so marvelously volatile—a volatility that mirrors, still, that of pop music itself, which remains smokestack lightning. The writing here attempts to catch some in a bottle.”

“Pop writing, at its best, doesn’t know the difference between desire and theory, which is precisely the reason for its power and its persistence. Lethem and Dettmar’s expansive anthology renders this wild, polychrome tradition, and the state of play today, with gusto.”
Ben Ratliff, author of Every Song Ever

JONATHAN LETHEM is the author of The Fortress of Solitude and nine other novels; KEVIN DETTMAR is the author of Is Rock Dead? and editor of The Cambridge Companion to Bob Dylan.
Loading...
or
Not Currently Available for Direct Purchase