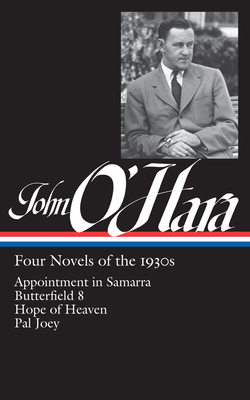 In one volume, four novels by "the real Fitzgerald": scintillating, sexually frank tales of the desperate pursuit of pleasure and status in Jazz Age America.

Here in one volume are four gripping novels about the anxious pursuit of pleasure and status in the Jazz Age by the writer who has been called “the real Fitzgerald.” In the brilliant debut Appointment in Samarra (1934), the life of car dealer Julian English unravels with stunning swiftness after he throws a highball in another man’s face. Butterfield 8 (1935), based on the notorious case of the drowned socialite Starr Faithfull, is the still-shocking story of one young woman’s defiant recklessness amid the desperate revels of Prohibition-era Manhattan. The long out-of-print Hope of Heaven (1938) shifts the scene to Los Angeles for a noirish tale of ill-fated love. And Pal Joey (1940), inspiration for the enduring Rodgers & Hart musical, presents O’Hara’s perhaps most memorable character, a sleazy nightclub emcee whose wised-up talk highlights O’Hara’s matchless ear for the American language.

"O'Hara wrote about surfaces to understand people, and he certainly understood people, writing about social class more directly and more vividly than almost anyone. He deserves his spot in the modernist pantheon." —Tyler Malone, Lit Hub

John O'Hara (1905-1970) was born and raised in Pottsville, Pennsylvania, a small city that became the setting for many of his novels and stories. As a young man he moved to New York City, where he began a long, fruitful, and often contentious relationship with The New Yorker, publishing more stories there than any other writer. His many novels include Appointment in Samarra (1934), Butterfield 8 (1935), and Ten North Frederick (1955); Pal Joey (1940) was adapted into a successful and often revived musical.

Steven Goldleaf, editor, is the author of John O'Hara: A Study of the Short Fiction and editor of John O'Hara: The New York Stories. He is Professor of English at Pace University.
Loading...
or
Not Currently Available for Direct Purchase