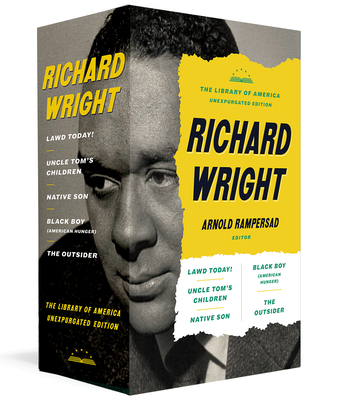 For the first time in a deluxe boxed set, the definitive edition of Richard Wright's landmark works in the form in which he intended them to be read.

Here, in authoritative texts based on the author's original typescripts and proofs, is the Library of America's acclaimed edition of Richard Wright's major works.

Wright's first novel, Lawd Today!, published posthumously in 1963 and here presented for the first time in its original form, interweaves news bulletins, songs, exuberant wordplay, and scenes of confrontation and celebration into a kaleidoscopic chronicle of the events of one day in the life of a black Chicago postal worker. Uncle Tom's Children first brought Wright to national attention. The characters in these five stories struggle to survive the cruelty of racism in the South, as Wright asks "what quality of will must a Negro possess to live and die with dignity in a country that denied his humanity."

Wright's masterpiece, Native Son, exploded on the American literary scene in 1940. The story of Bigger Thomas, a young black man living in the raw, noisy, crowded slums of Chicago's South Side, captured the hopes and yearnings, the pain and rage of black Americans with an unprecedented intensity and vividness. The text printed in this volume restores the changes and cuts--including the replacement of an entire scene--that Wright was forced to make by book club editors who feared offending their readers.

Wright's wrenching memoir Black Boy, an eloquent account of his struggle to escape a life of poverty, ignorance and fear in his native South, was an immediate bestseller when it appeared in 1945. But Wright's complete autobiography, published for the first time in this volume as Black Boy (American Hunger), is a far more complex and probing work, chronicaling his encounter with racism in the North, his apprenticeship as a writer, and his disillusionment with the Communist Party. Wright's 1953 novel The Outsider appears here in a text that restores the many stylistic changes and long cuts made by his editors without his knowledge. When Cross Damon is mistakenly believed to have died in a subway accident, he seizes the opportunity to invent a new life for himself. The text here, based on Wright's final, corrected typescript, casts new light on his development of the style he called "poetic realism."

Richard Wright (1908-1960) is one of the most influential African American writers of the last century. His major works include the story collection Uncle Tom's Children, the novel Native Son, and the autobiography Black Boy.

Arnold Rampersad, editor, is Sara Hart Kimball Professor in the Humanities, Emeritus, at Stanford University. He has written biographies of Langston Hughes (nominated for the Pulitzer Prize), Jackie Robinson, and, most recently, Ralph Ellison.
Loading...
or support indie stores by buying on
(This book is on backorder)