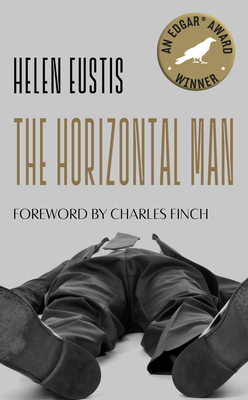 A philandering professor on the faculty of an Ivy League school is found murdered, setting off ripple effects of anxiety, suspicion, and panic in this Edgar Award-winning classic from 1946.

The Horizontal Man was Helen Eustis's only crime novel, and she won an Edgar Award for it, combining a wildly disparate set of elements into an enduringly fascinating work. In its way it is a classical whodunit that stands comparison with old-school practitioners such as Agatha Christie or Dorothy Sayers. This mystery transpires in the rarefied precincts of the English department of a venerable New England college, one very much of the restless postwar moment, echoing with references to Freud and Kafka. Eustis finds comedy high and low in a cavalcade of characters bursting at the seams with repressed sexual longings and simmering malice. Beyond the satire, she stirs up--with a narrative whose multiple viewpoints give the book a striking modernistic edge--a troubling sense of the mental chaos lurking just beneath the civilized surfaces of her academic setting.

Helen White Eustis (1916-2015) was born in Cincinnati, Ohio, and attended Smith College in Massachusetts, where she won a creative writing award. The Horizontal Man (1946), loosely based on her experiences at Smith, won the Edgar Award for Best First Novel the following year. She was the author of several other works of fiction, including The Fool Killer (1954), later adapted into the film of the same name in 1965.

Charles Finch writes both crime fiction (The Laws of Murder) and literary fiction (The Last Enchantments), as well as writing about books for a variety of publications, including Slate, the Chicago Tribune, and The New York Times.
Loading...
or support indie stores by buying on