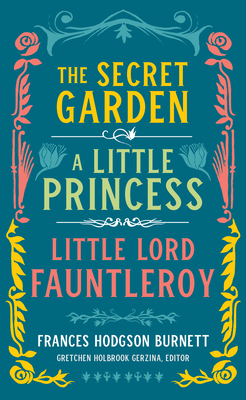 "You are a story--I am a story." Introduce to your family or rediscover for yourself three classic children's novels by Frances Hodgson Burnett, an English-born writer who moved to America at age 15 and who now joins the Library of America. This authoritative edition restores the novels to their original American texts, as Burnett wrote them and features over 40 painstakingly restored illustrations--16 in full color--plus a ribbon marker, helpful annotations, and a short chronology of Burnett's life by her biographer Gretchen Gerzina Holbrook. In The Secret Garden (1911), spoiled orphan Mary Lennox is sent to live at her uncle's manor, where she finds an abandoned walled garden. When she decides to restore the garden, she discovers the key to unlocking her own true self. Sara Crewe is the star pupil at her London boarding school in A Little Princess (1905) until news arrives that her father has died penniless. Sara is forced to become a servant, but she stays hopeful by imagining that she is secretly a princess. And in Little Lord Fauntleroy (1886), seven-year-old Cedric Errol lives in New York City and unexpectedly learns that his grandfather is an English earl. The Earl wants to teach Cedric about power and privilege, but little suspects that the innocent young American will completely change his own life. Soon to be a live action Disney movie starting Colin Firth and Julie Walters, The Secret Garden joins A Little Princess and Little Lord Fauntleroy in one deluxe illustrated volume, a perfect gift for young readers or for family libraries.

Gretchen Holbrook Gerzina, editor, is Paul Murray Kendall Professor of Biography and Professor of English at the University of Massachusetts/Amherst. She is the author of Frances Hodgson Burnett: The Unexpected Life of the Author of The Secret Garden (2004).
Loading...
or support indie stores by buying on