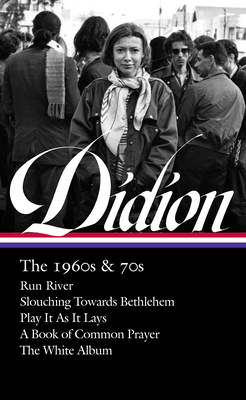 Joan Didion's influence on postwar American letters is undeniable. Whether writing fiction, memoir, or trailblazing journalism, her gifts for narrative and dialogue, and her intimate but detached authorial persona, have won her legions of readers and admirers. Now Library of America launches its multi-volume edition of Didion's collected writings, prepared in consultation with the author, that brings together her fiction and nonfiction for the first time. Collected in this first volume are Didion's five iconic books from the 1960s and 1970s: Run River, Slouching Towards Bethlehem, Play It As It Lays, A Book of Common Prayer, and The White Album. Whether writing about countercultural San Francisco, the Las Vegas wedding industry, Lucille Miller, Charles Manson, or the shopping mall, Didion achieves a wonderful negative sublimity without condemning her subjects or condescending to her readers. Chiefly about California, these books display Didion's genius for finding exactly the right language and tone to capture America's broken twilight landscape at a moment of headlong conflict and change.

“Almost any page of this invaluable book will take you somewhere emotionally and offer a paramount lesson in the power of Didion’s voice."  — Hilton Als, The New Yorker

"Readers carry Didion around in different ways, for different moments, and this new book is a defining compilation of her early writing." —Los Angeles Times

"The Library of America has another gem on its hands with this collection." —PopMatters

Joan Didion (1934—2021) was one of the most distinct American literary voices of the last half century. She was the author of five novels and ten books of nonfiction, including Slouching Towards Bethlehem, The White Album, Play It As It Lays, and mostly recently the New York Times best sellers The Year of Magical Thinking, Blue Nights, South and West, and Let Me tell You What I Mean. She was the recipient of numerous awards, including the National Book Award for Nonfiction and the National Book Foundations' Medal for Distinguished Contribution to American Letters.

David L. Ulin is the author or editor of ten books, including Sidewalking: Coming to Terms with Los Angeles; the Library of America's Writing Los Angeles: A Literary Anthology, which won a California Book Award; and The Lost Art of Reading: Books and Resistance in a Troubled Time. The former book editor and book critic of the Los Angeles Times, he teaches at the University of Southern California.
Loading...
or support indie stores by buying on