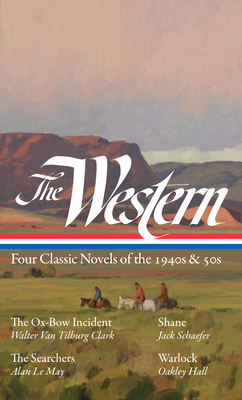 Rediscover the golden age of the Western with this collection of four unforgettable novels of honor, adventure, and violence set against the magnificent landscapes of the American frontier

The heroic exploits and violent struggles of the Old West come alive once more through this one-of-a-kind collection of four thrilling novels. Edited by Ron Hansen, this deluxe hardcover edition shows that the 1940s and 1950s was a golden age for the Western novel.

In the Pulitzer Prize-winning The Ox-Bow Incident, Walter van Tilburg Clark explores the thin line between civilization and barbarism through the story of a lynch mob that targets three innocent men, exposing a dark authoritarian impulse at work the American frontier. Set in Wyoming in 1889, a time when ranchers and cattle companies waged war with each other, Jack Schaefer's iconic Shane deploys many of the genre's most essential elements, brilliantly filtered through a boy's perceptions. Alan Le May's The Searchers, the basis for John Ford's cinematic masterpiece starring John Wayne, follows the dogged quest of two men to rescue a young girl taken prisoner by Comanche warriors. And Oakley Hall's Warlock, a novel that anticipates the later books of Cormac McCarthy and Larry McMurtry, casts the battle for control of a southwestern outpost as a bloody saga pitting a marauding gang of cowboys and rustlers against the town's defenders, led by the legendary gunslinger Clay Blaisedell. All four novels were memorably adapted for the screen, and their gripping stories--told with brisk narrative energy, psychological depth, and laconic humor--have contributed unforgettably to the Western's enduring legacy in American culture.

"There’s still something fresh and surprising to be found in these books. . . . These novels feel more textured, more nuanced, more lived-in than the films that were made from them.” —Stephen Harrigan, The Wall Street Journal

"Personally, I’m a bit obsessed with the collections on offer from The Library of America, and The Western is one of their best. It collects four landmark novels of the genre—The Ox-Bow Incident, The Searchers, Shane, and Warlock—and wraps them all up in a beautifully painted cover by G. Russell Case. It’s a simple collection, but it’s hefty enough to give any reader on your list something new to jump into for a month or so." —Jay Serafino, POP MATTERS

Ron Hansen, editor, is the author of three story collections and ten novels, including most recently The Kid, as well as The Assassination of Jesse James by the Coward Robert Ford, which was made into an Oscar-nominated film. His novel Atticus was a finalist for the National Book Award. He teaches at Santa Clara University.
Loading...
or support indie stores by buying on