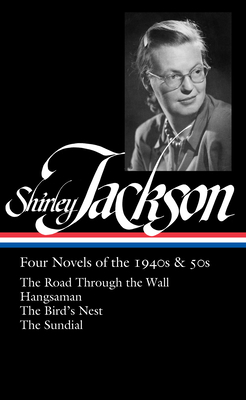 From the author of The Haunting of Hill House and We Have Always Lived in the Castle, four classic novels of subtle psychological horror.

Shirley Jackson--the beloved author of The Lottery, The Haunting of Hill House, and We Have Always Lived in the Castle--is more and more being recognized as one of the finest writers of the American gothic tradition, a true heir of Edgar Allan Poe and Henry James. Now, Jackson's award-winning biographer Ruth Franklin gathers the subtle, chilling, hypnotic novels with which she began her unique career. Her haunting debut tale The Road Through the Wall (1948) explores the secret desires, petty hatreds, and ultimate terrors that lurk beneath the picture-perfect domesticities of a suburban California neighborhood. In Hangsaman (1951)--inspired by the real-life disappearance of a Bennington College sophomore--the precocious but lonely Natalie Waite grows increasingly dependent on an imaginary friend. The Bird's Nest (1954) has not one but four protagonists: the shy, demure young Elizabeth and, revealed with a series of surprising twists, her other, multiple personalities. At the beginning of The Sundial (1958), the eccentric Halloran clan, gathered at the family manse for a funeral, becomes convinced that the world is about to end and that only those who remain in the house shall be saved. In what is perhaps her most unsettling novel, Jackson follows their crazed, violent preparations for the afterlife. Here is the perfect companion to Shirley Jackson: Novels & Stories, Library of America's edition of Jackson's landmark story collection, The Lottery, and her brilliant late novels The Haunting of Hill House and We Have Always Lived in the Castle.

Shirley Jackson (1919-1965), a master of modern horror and psychological suspense, was the acclaimed author of six novels, scores of stories, and two works of nonfiction.

Ruth Franklin is a book critic and frequent contributor to The New Yorker, Harper's, and many other publications. Her 2016 book Shirley Jackson: A Rather Haunted Life was a New York Times Notable selection and the winner of the National Book Critics Circile Award for Biography. A recipient of a New York Public Library Cullman Fellowship and a Guggenheim Fellowship, she lives in Brooklyn, New York.