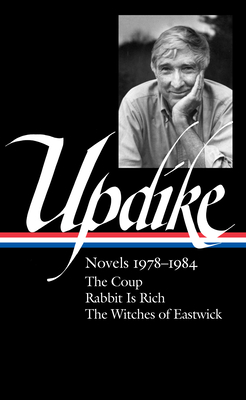 The third volume of Library of America's five-volume edition of Updike's novels features the continuation of the renowned Rabbit saga and two wickedly funny satires set in the charged realms of sex, politics, and family.

The third volume in our five-volume selected edition of the novels of John Updike includes three books: The Coup, one of Updike's most outlandish satires, set in a fictional African nation; Rabbit Is Rich, the third, and many say best, novel starring his most famous protagonist; and the wildly popular The Witches of Eastwick, which was memorably adapted in the film starring Cher, Michelle Pfeiffer, Susan Sarandon, and Jack Nicholson. In The Coup, a surprising departure from his prior novels, Updike stages a withering take down of an array of targets, from American materialism and its baleful effects on the developing world to the follies of Cold War geopolitics and the fevered megalomania of the dictatorial mind. In Rabbit Is Rich, the third installment of the Rabbit tetralogy, we meet up with Harry Angstrom, now 46, dealing as best he can with the challenges and cares of midlife, a time when "you are carrying the world in a sense and yet it seems more out of control than ever." In The Witches of Eastwick, Updike imagines a small New England town possessed by magic--at least as practiced by the female trio at its center who, freed from the burdens of their marriages, make common cause and unleash their whimsical witchcraft on Eastwick's narrow-minded townspeople.

Christopher Carduff is Books Editor of The Wall Street Journal and a former consulting editor at the Library of America. He is the editor of John Updike’s posthumous collections Higher Gossip: Essays and Criticism, Always Looking: Essays on Art, Selected Poems, and Collected Stories.
Loading...
or support indie stores by buying on