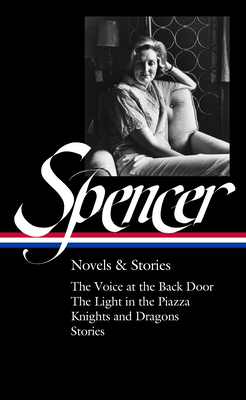 Novels & Stories (LOA #344): The Voice at the Back Door / The Light in the Piazza / Knights and Dragons / Stories

On her centennial, a contemporary of Flannery O’Connor and Harper Lee joins the Library of America with a volume that restores to print her searing novel about the late Jim Crow South

Elizabeth Spencer (1921-2019) was a major figure of the Southern Renaissance, though today her many books and stories are scattered or out of print. This Library of America volume brings together the very best of her writing--three novels and nineteen stories--from a career spanning more than six decades.

The Voice at the Back Door (1957), greeted by The New Yorker as "a practically perfect novel" and here restored to print, portrays small-town life in Mississippi during the late Jim Crow era and the self-interest and hatred that kept injustice firmly in place. Published two years after the Emmett Till lynching, it captures the spitting vehemence of its white characters' speech and may have been proven too potentially controversial for the Pulitzer board (which awarded no prize in 1957). Also included in this volume are The Light in the Piazza (1960), Spencer's most famous work, a deftly poignant comedy about Americans abroad that was adapted to the screen by Guy Green; and a second superb Italian novella, Knights and Dragons (1965), reminiscent of Henry James's novels in its atmosphere, interiority, and concern with transplanted Americans.

Spencer excelled in the short story form and this volume presents a career-spanning selection by editor Michael Gorra that ranges from the early "First Dark" (1959), a kind of ghost story about a spectral oversized house in a Southern town, to the valedictory "The Wedding Visitor" (2013), about the refusal to let the all-enveloping world of place, family, and childhood define one's adult life. Spencer's special focus was families, and few writers have so brilliantly plumbed the passions that unite them and the inner upheavals that can tear them apart.

Elizabeth Spencer (1921-2019) was the author of nine novels, eight collections of short stories, a memoir, and a play. She was a five-time recipient of the O. Henry Award and a two-time National Book Award finalist, and the winner of the PEN/Malamud Award for Short Fiction. Spencer was elected in the American Academy of Arts and Letters in 1985, and in 2009 received the Lifetime Achievement Award of the Mississippi Institute of Arts and Letters.

Michael Gorra, editor, is the Mary Augusta Jordan Professor of English at Smith College, where he has taught since 1985. He is the author of The Bells in Their Silence: Travels through Germany, Portrait of a Novel: Henry James and the Making of an American Masterpiece, a finalist for the Pulitzer Prize in the Biography, and The Saddest Words: William Faulkner's Civil War.