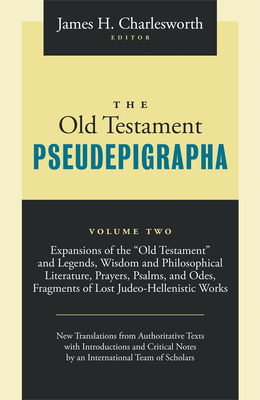 Key second-temple texts with introductions and notes by an international team of scholars--now available in affordable softcover bindings.

The writers of the Bible lived in a world filled with many writings. Some of these documents are lost forever, but many have been preserved. Part of these extant sources are the Pseudepigrapha. This collection of Jewish and Christian writings shed light on early Judaism and Christianity and their doctrines.

This landmark set includes all 65 Pseudepigraphical documents from the intertestamental period that reveal the ongoing development of Judaism and the roots from which the Christian religion took its beliefs. A scholarly authority on each text contributes a translation, introduction, and critical notes for each text. Volume 1 features apocalyptic literature and testaments. Volume 2 includes expansions of the "Old Testament" legends, wisdom, and philosophical literature; prayers, psalms, and odes; and fragments of lost Judeo-Hellenistic Works.

Of enormous value to scholars and students, religious professionals and interested laypeople.

James H. Charlesworth is the George L. Collord Professor of New Testament Language and Literature and director of the Dead Sea Scrolls Project at Princeton Theological Seminary, New Jersey. He also directs the Syrus Sinaiticus Project at St. Catherine's Monastery in Sinai. Charlesworth is a world-renowned translator, particularly of pseudepigraphical material, and the author of "Jesus and the Dead Sea Scrolls, The Bible and the Dead Sea Scrolls, The Serpent: A Symbol of Life or Death?" and "The Historical Jesus."
Loading...
or
Not Currently Available for Direct Purchase