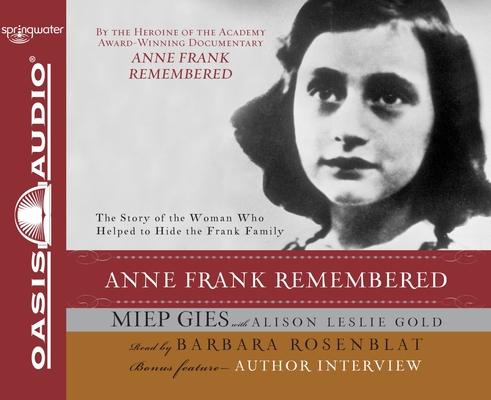 She found Anne Frank's diary and brought the world a message of love and hope.  For more than two years, Miep Gies and her husband helped hide the Franks from the Nazis. Like thousands of unsung heroes of the Holocaust, they risked their lives each day to bring food, news, and emotional support to the victims. From her own remarkable childhood as a World War I refugee to the moment she places a small, red-orange, checkered diary -- Anne's legacy -- in Otto Frank's hands, Miep Gies remembers her days with simple honesty and shattering clarity. Each page rings with courage and heartbreaking beauty.

"While most are familiar with Anne Frank’s diary, fewer remember the courage of the people who helped her family. Otto Frank’s employee, Miep Gies, coordinated the hiding place and worked through her own exhaustion and terror to keep the family safe and supplied with food and company. Barbara Rosenblat speaks with Gies’s own voice, bringing an impeccable Dutch flavor to her words and flawlessly pronouncing the many proper nouns of that challenging language. She effortlessly conveys Gies’s pervading sense of sadness tinged with frustration, anger, and resentment at the horrors inflicted by the Nazi regime. In the author’s afterword, Rosenblat captures equally well Gies’s acceptance and wonder at the way Anne’s story captured the heart of the world. Rosenblat’s performance easily captured ours."
R.L.L.  Winner of AudioFile Earphones Award, 2010 Audies Finalist - © AudioFile Portland, Maine

Co-author Alison Leslie Gold has written several books about the Holocaust.  She has enjoyed seeing Anne Frank Remembered translated into 19 languages in addition to winning the Best of the Best Award from the American Library Association in 1994.