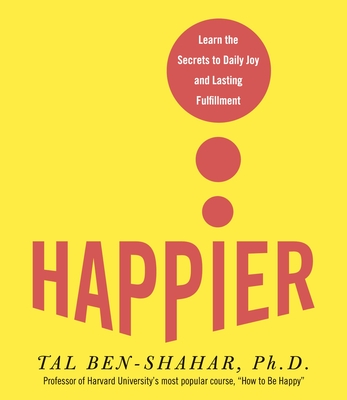 Learn the Secrets to Daily Joy and Lasting Fulfillment

Can we really learn to be happy? Yes, we can. Each semester, nearly 1,400 students sign up for Harvard professor Tal Ben-Shahar's life-changing class, "How to Get Happy." Currently it's the hottest course at Harvard, taken by 20 percent of its graduates.

In Happier, Professor Ben-Shahar brings the ideas of the Ivory Tower to Main Street, distilling the lessons and exercises from his course into a slim volume of practical wisdom. Grounded in the Positive Psychology movement, based on years of researching the works of scientists, academics, and philosophers, Happier emphasizes the importance of pursuing a life of both pleasure and meaning.

Praise For Happier: Learn the Secrets to Daily Joy and Lasting Fulfillment…

Tal Ben-Shahar, PhD, New York Times-bestselling author of Happier, taught the largest course at Harvard on “Positive Psychology” and the third largest on “The Psychology of Leadership,” attracting 1,400 students per semester—approximately 20 percent of all Harvard graduates. Ben-Shahar graduated from Harvard with a degree in philosophy and psychology, and for the last fifteen years has been teaching leadership, education, ethics, happiness, self-esteem, resilience, goal setting, and mindfulness. He is the author of the international best sellers Happier and Being Happy, which have been translated into 25 languages. An avid sportsman, Tal won the U.S. Intercollegiate and Israeli National squash championships.

JEFF WOODMAN originated the title role in Tennessee Williams' "The Notebook of Trigorin" and won the san Francisco Critics' circle Award for his performance in "an Ideal Husband" In addition to numerous Off-Broadway credits, his TV appearances include Law & Order, Sex and the City, and Cosby. His more than 200 audiobook narrations has earned him numerous awards, including a People magazine "Annual Top Five" citation and a spot in AudioFile magazine's "Top Fifty Voices of the Century".
Loading...
or
Not Currently Available for Direct Purchase