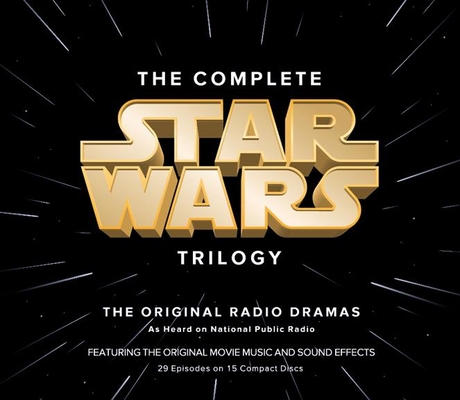 Star Wars, The Empire Strikes Back, and Return of the Jedi, slipcased.

When this series was first broadcast on National Public Radio in 1981, it generated the largest response in the network's history: 50,000 letters and phone calls in a single week, an audience of 750,000 per episode, and a subsequent 40-percent jump in NPR listenership.

This landmark production, perhaps the most ambitious radio project ever attempted, began when Star Wars creator George Lucas donated the story rights to NPR an affiliate. Writer Brian Daley adapted the film's highly visual script to the special demands and unique possibilities of radio, creating a more richly textured tale with greater emphasis on character development. Director John Madden guided a splendid cast--including Mark Hamill and Anthony Daniels, reprising their film roles as Luke Skywalker and the persnickety robot See Threepio--through an intense ten day dialogue recording session. Then came months of painstaking work for virtuoso sound engineer Tom Voegeli, whose brilliant blending of the actors' voices, the music, and hundreds of sound effects takes this intergalactic adventure into a realm of imagination that is beyond the reach of cinema.

The creator of the Star Wars Saga and Indiana Jones series, George Lucas is also the critically acclaimed director of American Graffiti and THX 1138, as well as the producer of a myriad of independent films. In 1971, Lucas formed his own film company, Lucasfilm Ltd., in San Rafael, Calif. In 1973, he co-wrote and directed Graffiti, which won the Golden Globe and garnered five Academy Award® nominations. Four years later, his Star Wars broke all box-office records and set new standards for sophistication in film visuals and sound. Lucas continued the Star Wars saga as storywriter and executive producer with The Empire Strikes Back in 1980 and Return of the Jedi in 1983. He returned to directing in 1999 with Star Wars: Episode I The Phantom Menace, which was the first major live-action film to be projected digitally.  Three years later, Episode II Attack of the Clones broke new ground as the first major movie shot using entirely digital media. In 2005, Star Wars: Episode III Revenge of the Sith concluded the live-action Skywalker arc, but Lucas continues to explore the “galaxy far, far away” and his impact on the film industry continues to grow.

In the late 1980s, Lucas donated the Star Wars story rights toKUSC-FM, the National Public  Radio af?liate station at his alma mater, the University of Southern California. The result was the Star Wars Original Radio Drama and subsequent Empire Strikes Back and Return of the Jedi radio dramas