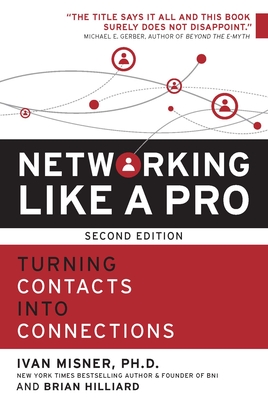 Grow Your Business with the Right Connections It's easy to feel like networking is a waste of time, energy, or money--but that just means you're doing it wrong. In this new edition of Networking Like a Pro, networking experts Dr. Ivan Misner and Brian Hilliard reveal key networking techniques to help you grow your business. In this comprehensive guide, you'll discover strategies that go beyond collecting business cards and turn networking into a profitable resource for your business. Dive into this book and discover how the most successful networkers leverage their brand, expertise, and customers to achieve greatness in life. You'll learn how to: Plus, gain access to worksheets, templates, and the Networking Scorecard designed to help you get the most out of your network. If you're ready to build connections that turn relationships into profitable customers, the Networking Like a Pro is for you.

Dr. Ivan Misner is the Founder and Chief Visionary Officer of BNI, the world's largest business networking organization. BNI was founded in 1985. The organization now has over 7,000 chapters throughout every populated continent of the world. In 2015, BNI Members generated more than $9.3 billion in closed business. Dr. Misner's Ph.D. is from the University of Southern California. He is a New York Times Bestselling author who has written 21 books including his latest release, "Who's In Your Room?" He is a columnist for Entrepreneur.com and has taught business management at several universities throughout the United States. In addition, he is the Senior Partner for the Referral Institute - a referral training company with trainers around the world. Called the "Father of Modern Networking" by CNN and one of the "Top Networking Experts to Watch" by Forbes, Dr. Misner is considered to be one of the world's leading experts on business networking and has been a keynote speaker for major corporations and associations throughout the world. He has been featured in the L.A. Times, Wall Street Journal, and New York. Times, as well as numerous TV and radio shows including MSNBC, CNN, the BBC and The Today Show on NBC.
Loading...
or support indie stores by buying on