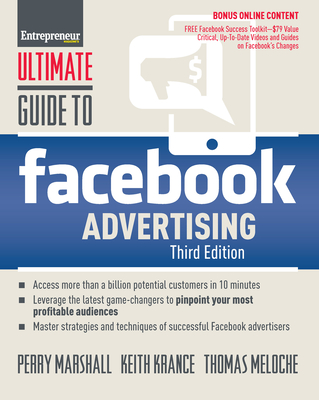 Now in its third edition, Ultimate Guide to Facebook Advertising delivers revised, expanded, and new chapters covering Facebook's newly released apps and services designed to target and monetize their 1.7 billion active users. Advertisers are then taken further than Facebook itself, as Marshall and co-authors provide priceless audience insight, exploring what was happening before visitors click on ads and what needs to happen after-10 seconds later, 10 minutes later and in the following days, and weeks. Updates specific to this edition include:
The introduction of ad space in Newsfeeds, Facebook Live, Branded Content and how to profit from it The launch of Facebook's Marketplace where businesses can sell direct to their community The integration of Instagram ads as part of the Facebook platform Tapping into Audience Network to maximize campaigns and increase conversions on all website traffic High-profile case studies from the Golden State Warriors, Jack Daniels, Rosetta Stone, and examples from President Obama's social media campaign for re-election.

Perry Marshall is the #1 author and world's most-quoted consultant on Google advertising. He has helped over 100,000 advertisers save literally billions of dollars in "AdWords stupidity tax." His Chicago company, Perry S. Marshall & Associates, consults both online and brick-and-mortar companies on generating sales leads, web traffic, and maximizing advertising results. He's been featured at conferences in the U.S., Canada, Ireland, Great Britain, Israel and Australia. He's shared the stage with Zig Ziglar, Brian Tracy, Jay Abraham, Dan Kennedy, Harvey Mackay and Les Brown. He's consulted in over 300 industries, from computer hardware and software to high-end consulting, from health & fitness to corporate finance. Keith Krance is the president of Dominate Web Media, an internet marketing consultant company dedicated to helping businesses get more traffic and customers using social media marketing. He has helped thousands of business owners and entrepreneurs build their brand and authority fast. Thomas Meloche is the founder and president of Procuit Inc. He has more than 25 years of experience starting, building, and selling commercial software products and software companies. He has launched multiple successful startups, including Menlo Associates LLC and the Menlo family of companies. Meloche participated in building Arbor Intelligent Systems, Inc. selling it to AppNet, Inc. and participating in the successful IPO. He is a graduate of the University of Michigan with a B.S. in Computer Science.
Loading...
or
Not Currently Available for Direct Purchase