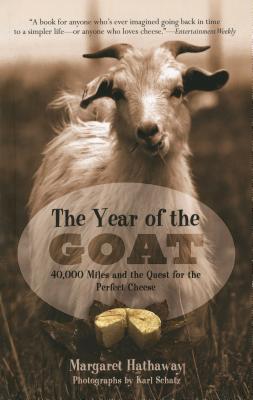 The Year of the Goat

40,000 Miles and the Quest for the Perfect Cheese

A fascinating one-year sojourn across America in search of greener pastures and the finest goat cheese* Many people dream of leaving the workaday world for a life of simplicity and freedom, and Margaret Hathaway and her then-boyfriend Karl did just that. In The Year of the Goat, the reader can jump in the goat mobile with them as they ditch their big-city lifestyle to trek across forty-three states in search of greener pastures and the perfect goat cheese. Along the way, the reader is introduced to a vivid cast of characters including farmers, breeders, cheese makers, and world-class chefs and discovers everything there is to know about goats and getting back to the land. But readers beware: When it comes to goat cheese, it can be love at first bite. Hathaway's descriptions of the various characters they meet both human and goat are funny and vivid. . . . This is a book for anyone who's ever imagined going back in time to a simpler life or anyone who loves cheese. Entertainment Weekly Back-to-the-land fantasies aren t new, but Hathaway gives theirs a modern twist. Publishers Weekly.

Praise For The Year of the Goat: 40,000 Miles and the Quest for the Perfect Cheese…

"[A] few thousand miles' worth of earnestly documented visits to such goat-focused destinations as halal slaughterhouses, goat chariot races, goat barbecues, and even the experimental goat farms of Auburn, Alabama, "the epicenter of research on goat reproduction", can hardly fail to awaken in the reader a genuine appreciation for, if not the world's finest cheeses, the endearing creatures (human and animal) that make some of those cheeses possible." --Saveur "Hathaway and Schatz's goat odyssey might be a little extreme, but the oddest observation in this charming and uplifting tale is that [they] aren't alone. Hathaway and Schatz end their journey on their own farm. The goats are in pens, but their owners are free." --Forbes.com  "This couple just smiles, and says 'goat cheese'Major life changes usually have predictable catalysts: a job offer, a divorce, a windfall, or a health crisis. Less likely is something as mundane as a plate of goat cheese, but that's what was responsible for four Alpine dairy goats, a rambling 106-year-old farmhouse in rural Maine, a baby girl, a book, and everything else that's happened to Margaret Hathaway and Karl Schatz in the last few years." --Boston Globe, profile  "Anyone who has watched someone fall in love will recognize the symptoms: It's sweet; it's naive; it's insane; it's contagious. But what Hathaway and Karl Schatz, her fiance (and photographer), have fallen for is the idea of raising goats." --Washington Post "I love Hathaway's description of her goaty adventures ... Hathaway's charming writing style illuminates rural landscapes and quirky, generally likable farmers ... The Year of the Goat is a sunny, optimistic book about a couple chasing an unconventional dream. It shows the back to the land movement to be alive and well and continually reinvented." --Maine Sunday Telegram  ... a really charming look into an obscure world -- as is done in movies like Ballroom Dancing, Best in Show, a Mighty Wind and so on. But The Year of the Goat, though occasionally tongue-in-cheek, isn't mocking as those movies are, but rather a very sweet exploration of self- and goat-discovery.- Nation's Restaraunt News Food Writer's Diary

Reading Margaret and Karl’s delightful journey reminded me of the ideals that brought many of us at Moosewood together over thirty years ago. Margaret Hathaway’s spirited storytelling and off-beat humor not only reawakened my own memories of adventurous times, but revealed that the dream to go back to the land” to lead a simpler life is alive and flourishing. And boy did I learn a lot about goats and cheese!

Back-to-the-land fantasies aren’t new, but Hathaway gives theirs a modern twist by emphasizing terroir,” the idea that food is rooted in the land,” and of connecting the palate to the place.” Local-eating, slow-food activists will find much to chew on here.”

"Hathaway and her future husband, Karl Schatz, were citified New Yorkers who dreamed of a life in the country -  "in a many-roomed old house with a wide porch and a big garden."  But how would they pay for it?  Inspired by Ronnybrook Farm Dairy, the pair decide to raise goats. First, they embark on a 40,000-mile odyssey, visiting goat farmers and cheese makers in 43 states.  Hathaway's descriptions of the various characters they meet - both human and goat - are funny and vivid, though occasionally overlong.  This is a book for anyone who's ever imagined going back in time to a simpler life - or anyone who loves cheese."--Entertainment Weekly
"Burned out by the rigors of New York City, Hathaway and her boyfriend imagined an agricultural life. Self-described foodies (Hathaway managed Manhattan's famed Magnolia bakery), the couple thought about making goat cheese, and after agonizing about how best to realize their dream, they decided to spend a year researching and visiting goat operations throughout the country. In the Year of the Goat, according to the Chinese zodiac, they quit their jobs and set off, camping along the way. Their travels introduce them to goat conventions and festivals (goat chariot races are the headlining attraction at one), world-renowned chefs and cheese experts, and cheese makers at dairies large and small. Hathaway pokes fun at her naive notions of rural life with a sly humor that nicely balances the naked earnestness of the endeavor. The details of animal husbandry and cheese production will intrigue those interested in foods origins, and many readers, particularly city dwellers, will also be captured by the personal story of a young couples unusually thoughtful efforts to build a meaningful life together."Copyright 2007 Booklist Reviews.

Margaret Hathaway and Karl Schatz recently collaborated on Living with Goats (Lyons Press). Margaret is a former manager of the Magnolia Bakery in New York City and a founding member of the Portland Slow Food Convivium. Karl is the director of Aurora Photos and the former online photo editor at Time magazine. They live in Maine with their daughters, their dog, and an ever-growing group of animals. Their Web site is livingwithgoats.com.
Loading...
or
Not Currently Available for Direct Purchase