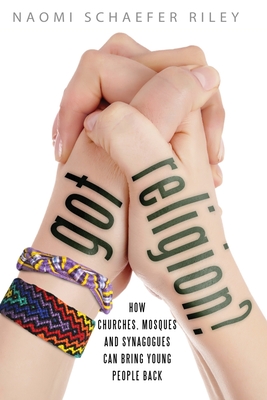 How Churches, Mosques, and Synagogues Can Bring Young People Back

Why are young people dropping out of religious institutions? Can anything be done to reverse the trend? In Got Religion?, Naomi Schaefer Riley examines the reasons for the defection, why we should care, and how some communities are successfully addressing the problem.

The traditional markers of growing up are getting married and becoming financially independent. But young adults are delaying these milestones, sometimes for a full decade longer than their parents and grandparents. This new phase of “emerging adulthood” is diminishing the involvement of young people in religious institutions, sapping the strength and vitality of faith communities, and creating a more barren religious landscape for the young adults who do eventually decide to return to it. Yet, clearly there are some churches, synagogues, and mosques that are making strides in bringing young people back to religion.

Got Religion? offers in-depth, on-the-ground reporting about the most successful of these institutions and shows how many of the structural solutions for one religious group can be adapted to work for another.

The faith communities young people attach themselves to are not necessarily the biggest or the most flashy. They are not the wealthiest or the ones employing the latest technology. Rather, they are the ones that create stability for young people, that give them real responsibility in a community and that help them form the habits of believers that will last a lifetime.

Praise For Got Religion?: How Churches, Mosques, and Synagogues Can Bring Young People Back…

“Naomi Schaefer Riley is an astute cultural observer and critic, and a very good interpreter of the larger meanings and implications of social science research. For those concerned about the religious live of emerging adults, Got Religion? will be essential reading.” —Christian Smith, William R. Kenan Jr. Professor of Sociology and principle investigator, National Study of Youth and Religion

“In researching and writing Got Religion? Naomi Schaefer Riley has accomplished a difficult task. She has managed to make fairly dense millennial generation demographic material both interesting and understandable. She has also connected the dots in illustrating how such material is relevant and instructive to those who seek to ‘bring young people back’ to their various faith traditions.” —Dr. Richard Land, president of Southern Evangelical Seminary

“The precipitous drop in religious affiliation among young people in the United States has been covered to the point of exhaustion—often generating more heat than light. In Got Religion? Naomi Schaefer Riley weaves together a compelling counter narrative that focuses on the best examples of how various communities—Judaism, Catholicism, non-denominational Christianity and Islam—are successfully engaging young people. It is a study in American ingenuity, insight and reinvention as it applies to faith communities and it should be read by anyone in the field who believes that studying what works is the best way to fix what's wrong.” —Bill McGarvey, author of The Freshman Survival Guide

“Got Religion? offers two reassuring messages to those worried that the under-thirty generation is running away from religion. First, it shows that the problem is not confined to particular faiths. Mormons and Muslims turn out to be as concerned as Catholics, Protestants and Jews. Second, it demonstrates that creative programs can succeed in luring young people back to religion. There is reason for hope. Chocked full of ideas and insights, this is a book that anyone interested in ‘youth engagement’ should read.” —Jonathan D. Sarna, president, Association for Jewish Studies; the Joseph Engel Visiting Professor of American Jewish Studies, Harvard University; the Joseph H. & Belle R. Braun Professor of American Jewish History; and chair, Hornstein Jewish Professional Leadership Program, Brandeis University

“No one writes about the religious experiences, beliefs, and practices of contemporary Americans more astutely or with great insight than Riley. In Got Religion? she explores the factors that tend to draw young adults into, or alienate them from, communities of faith. This is far from an exercise in merely academic sociology of religion. It contains valuable lessons for faith communities and their leaders—from Catholics and Jews to Mormons and Muslims—about what they can do to give young people, including young couples with children, stability and responsibility, helping them to deepen their spiritual lives and form habits that will serve them well in every dimension of their lives.” —Robert P. George, McCormick Professor of Jurisprudence, Princeton University

“If you want a book with pat answers to the "problem" of millennials and organized religion, you've come to the wrong place. If, however, you want to consider the many ways that adults in their 20s and 30s engage with religion, God, and peoplehood, if you want a book that holds just as many questions as it does answers, then pull out your highlighter and get comfortable. Riley takes us on a fascinating journey that traverses religious, geographical, racial, and cultural boundaries. Learn from those who may share a different understanding of God but a similar drive to create a meaningful life. I know I did.” —Rabbi Shira Stutman, director of Jewish programming at Sixth & I

“Naomi Schaeffer Riley is one of the keenest analysts of American religious life today. In this book, she takes up a question that every religious community is asking. Not everyone will agree with everything in this book, but everyone who cares about American religious life will find a provocative and fruitful catalyst for conversation and action.” —Russell D. Moore, president, Southern Baptist Ethics & Religious Liberty Commission

Naomi Schaefer Riley is a weekly columnist for the New York Post and a former Wall Street Journal editor. She is the author of Til Faith Do Us Part: How Interfaith Marriage Is Transforming America, God on the Quad, and The Faculty Lounges. She lives with her husband, Jason, and their three children in suburban New York City.
Loading...
or
Not Currently Available for Direct Purchase