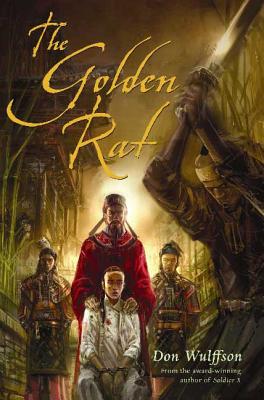 Since the death of his mother, Baoliu has grown apart from his family and is bitterly resentful of his father's new wife, who wears his mother's clothing and even her jewelry. One night, Baoliu's stepmother is attacked and murdered. The most obvious suspect, Baoliu is tried for the crime, convicted, and sentenced to death by beheading.

With no one on his side, how will Baoliu prove his innocence? How will he avoid his violent and horrid fate? Who, if anybody, will help him? And if the murderer wasn't Baoliu, then who was it? Filled with unexpected plot twists, The Golden Rat is a totally engrossing, enormously entertaining murder mystery that also poses thought provoking questions about how we are judged for our mistakes--large and small--by our families and the societies in which we live.

Praise For The Golden Rat…

"With well-researched and meticulously recorded details of life under fire, Wulffson urges readers to look past the outer trappings of the enemy to discover the human being inside the uniform." --Publishers Weekly, starred review

Though he also publishes adult works, Don Wulffson has been writing kids books for more than 30 years. Some of his favorites include Soldier X, which received many honors, including a Christopher Award; and The Upside Down Ship, a novel, which was recently abridged and illustrated for the first time. Don lives with his wife, Pam, in Southern California. He writes every day.
Loading...
or
Not Currently Available for Direct Purchase