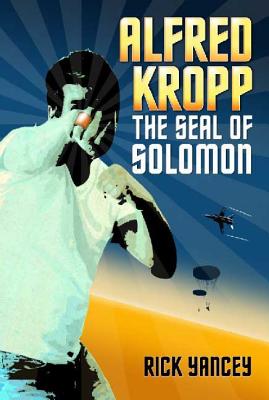 The Seal of Solomon

Thousands of years ago, King Solomon used a powerful ring, known as the Great Seal, to imprison the fallen angels of heaven in a sacred vessel. Now both the ring and the vessel have been stolen from OIPEP by a double-crossing Mike Arnold. Should Mike choose to wield the demons' power, all hell could break lose . . . literally. Led by the mysterious Op-Nine, OIPEP has a plan to retrieve the artifacts, and their success depends on the least likely candidate, none other than the last descendent of Lancelot, Alfred Kropp. In this thrilling new adventure, author Rick Yancey proves once again that Alfred Kropp's unlikely role as a world-saving hero is definitely no accident.


Praise For The Alfred Kropp: The Seal of Solomon…

From School Library Journal*Starred Review* A great book for boys, as well as reluctant readers, The Seal of Solomon tells a rip-roaring story that teens will love and won't be able to put down. --School Library Journal From Publisher's Weekly
The emotional core of this novel involves likeable Alfred's unresolved issues about the death of his mother at age 12, and his sense of loss is palpably heartbreaking. The villain Arnold's issues remain far murkier, his motivation subsumed by the same Hollywood action-flick pyrotechnics--explosive showdowns, multiple near-brushes with death--that made the first book a hit with kids who might otherwise be playing video games. --Publishers Weekly
From Kirkus Reviews
...[B]oys will not be disappointed with the gruesome consequences for those who look into the demon's eyes. The world's fastest car, huge CW3XD guns that use bullets laced with Alfred's blood and a death-defying sky dive are only a few of the other action magnets sure to attract middle-school readers. Fans of the first episode, The Extraordinary Adventures of Alfred Kropp (2005), will not be disappointed. --Kirkus Reviews
From Booklist
Readers won't have to have read the first title to enjoy this over-the-top adventure fantasy.  Yancey manages a balancing act, blending action-packed scenes with tongue-in-cheek humor and occasional heart-on-sleeve sincerity. --Booklist

"This story of a 'big-headed loser' is as funny as it is scary." --Publishers Weekly, starred reviews
"Yancey has hit one out of the park." --Kirkus Reviews, starred review

"With bumbling, lumbering, wisecracking Alfred Kropp by our side, there's never a dull moment on this bumpy ride that proves just how extraordinary 'ordinary' can be." --Teenreads.com

"One of those unforgettable tales . . . that stays with you long after you are drained breathless by a captivating read."  --Ridley Pearson, best-selling author

"I read as I used to when I was a kid, totally engrossed and utterly unwilling to leave the world of the story. I want more!" --Bruce Coville, best-selling author

RICK YANCEY is the author several books for adults, including The Highly Effective Detective. He is also a produced playwright and former theater critic. This is his second book for young adults. He lives in Gainesville, Florida with his wife and three sons. Visit him at www.rickyancey.com.
Loading...
or
Not Currently Available for Direct Purchase