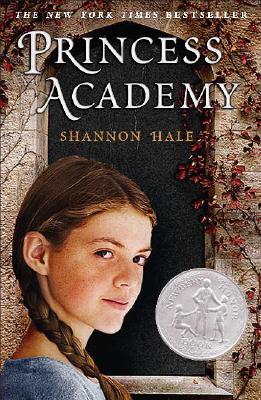 Miri lives on a mountain where, for generations, her ancestors have quarried stone and lived a simple life. Then word comes that the king's priests have divined her small village the home of the future princess. In a year's time, the prince himself will come and choose his bride from among the girls of the village. The king's ministers set up an academy on the mountain, and every teenage girl must attend and learn how to become a princess.

Miri soon finds herself confronted with a harsh academy mistress, bitter competition among the girls, and her own conflicting desires to be chosen and win the heart of her childhood best friend. But when bandits seek out the academy to kidnap the future princess, Miri must rally the girls together and use a power unique to the mountain dwellers to save herself and her classmates.

A Newbery Honor Book
A New York Times Bestseller
A Publishers Weekly Bestseller
A Book Sense Bestseller
An ALA Notable Children's Book
A NECBA Top 10 Fall Book
A Book Sense Children's Pick "The most compelling, believable, poignant love story I have read in many a year. Shannon Hale is already, after only a few books, one of our best writers of fantasy. She is also one of those rare storytellers who can bring a jaded old reviewer like me to well-earned tears." --Orson Scott Card, New York Times bestselling author

"When it comes to contemporary classics, Shannon Hale has the makings of someone whose books will be read and reread for decades to come." --The 2006 Newbery Committee

"Princess Academy is the strong, well-written story of one girl's determination to show that even a small mountain flower can be as valuable as a gold crown."
--Teenreads.com

" "This is not a fluffy, predictable fairy tale . . . Instead, Hale weaves an intricate, multilayered story about families, relationships, education, and the place we call home."
--School Library Journal, starred review

Shannon's mother says she was a storyteller from birth, jabbering endlessly in her carriage as the two strolled through the neighborhood; once she could form complete sentences, she made up stories, bribing her younger siblings to perform them in mini plays. When she was ten, she began writing books, mostly fantasy stories where she was the heroine, and she continued writing secretly for years while pursuing acting in stage and improv comedy. After detours studying in Mexico, the U. K., and Paraguay, Shannon earned a bachelor's degree in English from the University of Utah and a Masters in Creative Writing from the University of Montana. In the interim, she submitted short stories and novels to magazines and publishers, saving all her rejection letters which she has since laminated into one continuous 60-foot roll which she proudly unfurls to audiences as a testament to her dedication and determination.Since the publication of her first book, "The Goose Girl," in 2003, Shannon has become a beloved author to young readers as well as booksellers and educators. Her third novel, "Princess Academy," earned her a Newbery Honor and is a "The New York Times," Book Sense, and "Publishers Weekly" bestseller. Shannon has also written two books for adults, "Austenland" and "The Actor and the Housewife." Shannon lives in Salt Lake City, Utah, with her husband, Dean, their children, and their pet, a small plastic pig. www.shannonhale.com
Loading...
or
Not Currently Available for Direct Purchase