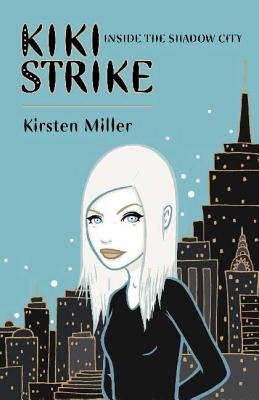 Inside the Shadow City

Life will never be the same for Ananka Fishbein after she ventures into an enormous sinkhole near her New York City apartment. A million rats, delinquent Girl Scouts out for revenge, and a secret city below the streets of Manhattan combine in this remarkable novel about a darker side of New York City you have only just begun to know about…


Praise For Kiki Strike: Inside the Shadow City…

“If Harry Potter lived in New York City, he'd have a mad crush on 14-year-old Kiki Strike, the heroine of Kiki Strike: Inside the Shadow City and the next literary idol of the tween-to-infinity set. Kiki's creator, Kirsten Miller, is destined to become the object of millions of readers' adoration.” —Vanity Fair

“In between the 100 MPH excitement and the fascinating and intensely diverse characters, Miller has expertly woven a vital message into her story: the importance of a young woman having strength and belief in herself.” —teenreads.com

“A fascinating, convoluted mystery/adventure. ...All readers will welcome the hints of sequels.” —Booklist, starred review

“This is a rallying cry for the ‘curious' and an effective anthem of geek-girl power . . . All in all, an absurdly satisfying romp for disaffected smart girls.” —Kirkus Reviews

“Kiki Strike celebrates the courage and daring of seemingly ordinary girls, and it will thrill those who long for adventure and excitement.” —School Library Journal