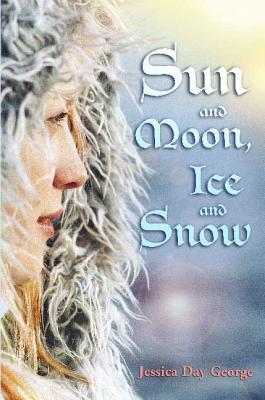 Blessed or cursed with an ability to understand animals, the Lass (as she's known to her family) has always been an oddball. And when an "isbjorn" (polar bear) seeks her out, and promises that her family will become rich if only the Lass will accompany him to his castle, she doesn't hesitate. But the bear is not what he seems, nor is his castle, which is made of ice and inhabited by a silent staff of servents. Only a grueling journey on the backs of the four winds will reveal the truth: the bear is really a prince who's been enchanted by a troll queen, and the Lass must come up with a way to free him before he's forced to marry a troll princess.

Jessica Day George is the author of Sun and Moon, Ice and Snow, Dragon Slippers, and its sequel, Dragon Flight. Originally from Idaho, she studied at Brigham Young University and lived in Delaware and New Jersey before settling down in Salt Lake City, Utah. She had been a movie store clerk, librarian, bookseller, and school office lady before she got her big break. Jessica lives with her husband, their young son, and a five-pound Maltese named Pippin in a house that needs to be vacuumed much too often. www.JessicaDayGeorge.comwww.dragonslippers.net
Loading...
or
Not Currently Available for Direct Purchase