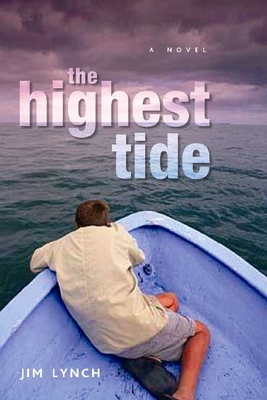 One moonlit night, thirteen-year-old Miles O'Malley sneaks out of his house and goes exploring on the tidal flats of Puget Sound. When he discovers a rare giant squid, he instantly becomes a local phenomenon shadowed by people curious as to whether this gawky teenager is just an observant boy or an unlikely prophet. But Miles is really just a kid on the verge of growing up, infatuated with the girl next door, worried that his bickering parents will divorce, and fearful that everything, even the bay he loves, is shifting away from him, In this beguiling novel, we witness dramatic changes for both Miles and the coastline that he adores over the course of one unforgettable summer.


Praise For The Highest Tide…

*Starred Review* "The fertile strangeness of marine tidal life becomes a subtly executed metaphor for the bewilderments of adolescence in this tender and authentic coming-of-age novel."--Publishers Weekly (starred review)

"A poignant coming-of-age story and an enchanting primer on the life aquatic. The Highest Tide is as crisp and clean as a cool dip into the water, and just about as refreshing.--Entertainment Weekly

"Nerdy, vulnerable, obsessive, pure, Miles has a flavor about him of Christopher…in The Curious Incident of the Dog in the Night-Time…Above all the book is blessed by a genuine sense of wonder."--Miami Herald

"[A] graceful and inventive first novel…[Lynch's] declarative style and vivid imagery allow the science of the ocean to blend easily with its poetry." --New York Times Book Review

"Move over, Holden Caulfield; here's Miles…An uncommon and uncommonly good coming-of-age novel." --Chicago Tribune "Never before have the details from a book intrigued me so much that I immediately wanted to research them so I could see what was described in the writing. Until I read THE HIGHEST TIDE by Jim Lynch, that is. ...When Miles describes the things he sees it is with so much respect and awe that readers can't help but be drawn into a fascination of this world that is so often overlooked. I found myself wanting to pick up the book during my day so that I could see
where else Miles's discoveries would take me. ...Jim Lynch is able to create beauty with words the way artists do with paintbrushes. Read this book. You will see our planet differently. At least the 2/3 of it that is water and contains such intrigue." --Teensreadtoo.com

Jim Lynch spent four years as the Puget Sound reporter for the Oregonian, and has won national journalism awards and published short fiction in literary magazines. A Washington state native, Lynch currently writes and sails from his home in Olympia, where he lives with his wife and daughter. The Highest Tide is his first novel.
Loading...
or
Not Currently Available for Direct Purchase