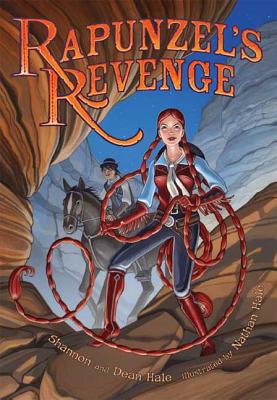 “At last, the real tale of Rapunzel and her braids (used less to escape from towers and more to lasso villains). The illustrations help illuminate the adventures of a sassy maiden who's out to help the downtrodden and punish the powerful.”
— Katie Capaldi, McLean & Eakin Booksellers, Petoskey, MI
View the List

Rapunzel escapes her tower-prison all on her own, only to discover a world beyond what she'd ever known before. Determined to rescue her real mother and to seek revenge on her kidnapper would-be mother, Rapunzel and her very long braids team up with Jack (of Giant killing fame) and together they preform daring deeds and rescues all over the western landscape, eventually winning the justice they so well deserve.

For Adults
Austenland
Midnight in Austenland
The Actor and the Housewife

"This novel will be a special treat." - Publishers Weekly, starred review, on RIVER SECRETS

Nathan Hale is the author and illustrator of the picture book The Devil You Know, and the illustrator of The Dinosaur’s Night Before Christmas, Animal House, and Balloon on the Moon. He has also illustrated two graphic novels, Rapunzel’s Revenge and Calamity Jack by Shannon and Dean Hale.
Loading...
or support indie stores by buying on