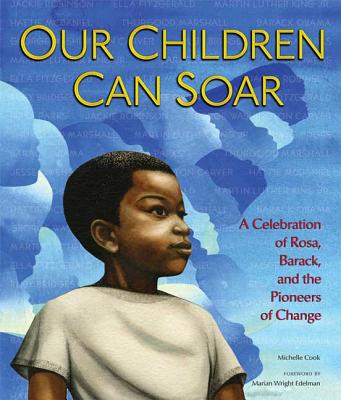 Our Children Can Soar

A Celebration of Rosa, Barack, and the Pioneers of Change

Rosa sat so
Martin could march.
Martin marched so
Barack could run.
Barack ran so
Our children can soar.

This is the seed of a unique and inspirational picture book text, that is part historical, part poetry, and entirely inspirational. It symbolically takes the reader through the cumulative story of the US Civil Rights Movement, showing how select pioneers' achievements led up to this landmark moment, when we have elected our first black President.

Each historical figure is rendered by a different award-winning African-American children's book illustrator, representing the singular and vibrant contribution that each figure made.

James Ransome is the acclaimed illustrator of more than twenty books for children, including The Creation, for which he received the Coretta Scott King Award for Illustration. He lives with his family in upstate New York.

Bryan Collier is the author and illustrator of Uptown, winner of the Coretta Scott King Award and the Ezra Jack Keats Book Award. He is also the illustrator of Martin’s Big Words by Doreen Rappaport and Rosa by Nikki Giovanni, both of which are Caldecott Honor Books. The Chicago Sun-Times has called Collier’s art “breathtakingly beautiful.” Mr. Collier lives with his family in Harlem in New York City.

Frank Morrison was born in Massachusetts and then moved to New Jersey. He grew up during the early days of rap music, graffiti and break dancing. He was a well-known graffiti artist and an accomplished break dancer who was part of the Sugar Hill Gang's dance entourage. It was during one of the group’s European tours he got a chance to visit the Louvre in Paris and was so intrigued by the magnificent art that he decided, at that moment, to return to his roots and become an artist.

Frank today enjoys the attention of art galleries nationwide, and is the recipient of a Coretta Scott King/John Steptoe New Illustrator Award for Jazzy Miz Mozetta by Brenda C. Roberts. The artist, who works in watercolor and acrylic, makes his home in Georgia with his wife, three sons, and daughter.

Pat Cummings is the illustrator of more than thirty picture books, many of which she has written herself. She is a Coretta Scott King Award winner, whose books include Ananse and the Lizard and Angel Baby. Ms. Cummings teaches at Parson's School of Design and lives in Brooklyn with her husband.

AG Ford is a New York Times bestselling children's book illustrator and recipient of two NAACP Image Awards (for Our Children Can Soar and What Color is My World). He has over 30 published books for children. Mr. Ford grew up in Dallas, Texas and attended The Columbus College of Art and Design. He lives in Frisco, Texas with his family.

E. B. Lewis won the 2005 Caldecott Honor Book for Coming On Home Soon by Jacqueline Woodson and the 2003 Coretta Scott King Illustrator Award, for Talkin' About Bessie by Nikki Grimes. Mr. Lewis teaches illustration at Philadelphia's University of the Arts. He lives in Folsom, New Jersey.
Loading...
or
Not Currently Available for Direct Purchase