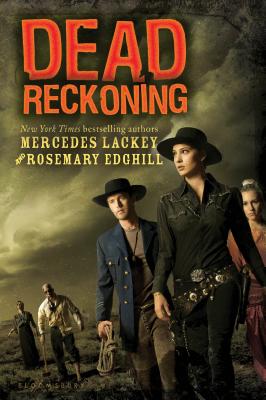 Jett is a girl disguised as a boy, living as a gambler in the old West as she searches for her long-lost brother. Honoria Gibbons is a smart, self-sufficient young woman who also happens to be a fabulous inventor. Both young women travel the prairie alone - until they are brought together by a zombie invasion! As Jett and Honoria investigate, they soon learn that these zombies aren't rising from the dead of their own accord ... but who would want an undead army? And why? This gunslinging, hair-raising, zombie western mashup is perfect for fans of Cowboys vs. Aliens and Pride & Prejudice & Zombies.

Rosemary Edghill is a prolific writer in several genres, under her own name and various pseudonyms. Her Bast books, witty mysteries featuring a Wiccan amateur detective, were collected in Bell, Book, and Murder. She has also written Regency Romances and fantasy novels, including several collaborations with Mercedes Lackey (Spirits White as Lightning and Mad Maudlin) and Andre Norton (Shadow of Albion and Leopard in Exile).

Mercedes Lackey is the author of the bestselling Valdemar series, the Obsidian Trilogy (The Outstretched Shadow, To Light a Candle, and When Darkness Falls), the Enduring Flame trilogy (The Phoenix Unchained, The Phoenix Engendered, and The Phoenix Transformed), and The Phoenix Tales of the Five Hundred Kingdoms. She has written many other books, including Trio of Sorcery, Phoenix and Ashes, Sacred Ground, The Firebird, The Fairy Godmother, and Alta. Lackey is the co-author, with Andre Norton, of the Halfblood Chronicles, including Elvenborn. Mercedes Lackey was born in Chicago and graduated from Purdue University. She has worked as an artist’s model, a computer programmer, and for American Airlines, and has written lyrics and recorded more than fifty songs. She lives in Oklahoma.
Loading...
or
Not Currently Available for Direct Purchase