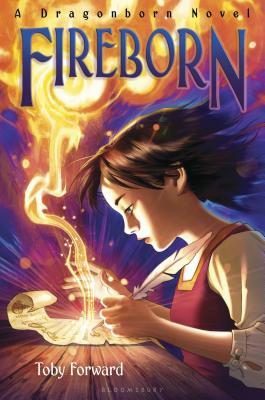 Enter a world of wild magic in this fast-paced, adventurous prequel to the acclaimed Dragonborn.

When an old, dying wizard steals magic from his young apprentice, Bee, he changes his own life and nearly destroys hers. His betrayal also releases a wild magic that turns fields to flames and upsets the balance of nature.

It will take another apprentice, Cabbage, and his master, Flaxfield, to find Bee and save the universe from being consumed by enchanted flames.

This companion novel to Dragonborn is a breathtaking work of magic, suffering, friendship, and transformation--and the new power that rises from the ashes of a terrible deed.


Praise For Fireborn: A Dragonborn Novel…

“An intelligent, down-to-earth wisdom runs throughout, as enriching as any magic. . . . Humble, earthy . . . and thought provoking--making this excellent middle-grade fantasy a rich mix of character, seriousness, comic foibles, and loving exactitude.” —The Horn Book Magazine

“This stand-alone prequel to Dragonborn is distinguished by its vivid cast of characters and multilayered relationships . . . The fine writing and compelling plot are sure to enthrall readers of high fantasy.” —School Library Journal

“Dark elements, however, are what make this book compelling . . . Fans of high fantasy may . . . simply immerse themselves in the adventures and friendships and enjoy the read.” —VOYA

Awards for Fireborn: A Kirkus Best Book of 2013

“This beautifully written fantasy . . . masterfully balances humor with deadly serious content in a manner reminiscent of Lloyd Alexander at his best . . . This lovely tale, first in a series, should strongly appeal to fantasy aficionados.” —Publishers Weekly, starred review, on Dragonborn

“Forward can tell a story . . . the next three volumes hold great promise for fans of adventure, fantasy, and dragons.” —Booklist on Dragonborn

Toby Forward is the author of the picture book The Wolf 's Story and the middle grade novel Traveling Backwards, as well as several other books for children in his native UK.
www.tobyforward.co.uk