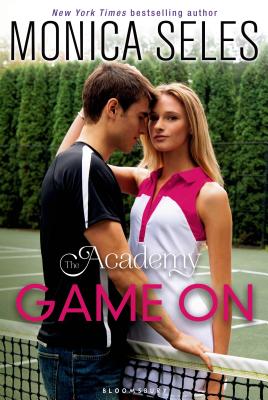 The Academy is an International Sports Mecca for teen athletes of all sports. There are only two ways in. Deep pockets or enough talent to score a scholarship.

Young tennis star Maya's dreams have finally come true when she earns a scholarship to The Academy. Plucked from her small town, Maya moves to the sports training facility/boarding school to (hopefully) start the beginning of her pro career. But Maya's fantasy of The Academy doesn't quite match the reality. Because where there are hot, talented teens, there's a lot of drama. Meet the players:

Cleo: Maya's rebel/punk roommate who is nearing the top of the golf world.
Renee: The gorgeous swimmer with enough money to buy her way into The Academy.
Nicole: A tennis star who feels threatened by Maya (but she'd never admit it).
Travis: The son of The Academy owner--perfectly groomed to be the next NFL star.
Jake: Travis' younger brother--the bad boy to his brother's good.

MONICA SELES won the French Open at the age of 16. She went on to become the number one ranked woman in tennis, winning a total of nine Grand Slam titles before retiring from the game in 2004. Monica was inducted into the Tennis Hall of Fame in 2009. She is now an ambassador for IMMSAM, the inter-governmental institution for the use of Micro-algae Spirulna Against Malnutrition and a board member of the Laureus Sports for Good Foundation, using the power of sport as a tool for change. Her memoir, Getting a Grip: On My Mind, My Body and Myself was a national best-seller.

JAMES LAROSA loves drama, but he was too much of a goody-goody growing up to actually cause any. So he became a television writer, concocting scandalous tales for CBS, NBC, ABC Family and MTV among others. He also dug up dirt in sports, interviewing top athletes for USA Today, Tennis Magazine and Tennis Channel.