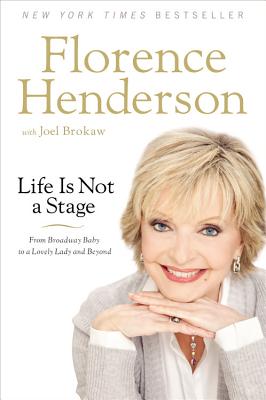 Life Is Not a Stage

From Broadway Baby to a Lovely Lady and Beyond

For millions of people around the world, Carol Brady is synonymous with motherhood, but growing up as the youngest of ten children in rural Indiana in the aftermath of the Great Depression, Florence Henderson lived a life quite different from that of the quintessential TV mom she later played on television.
Florence's father was a dirt-poor tobacco tenant farmer who was nearly fifty years old when he married Florence's twenty-five-year-old mother, and was nearly seventy when Florence was born. Florence's childhood was full of deprivation and abandonment. Her father was an alcoholic at a time when there was no rehab or help for the disease. Their home rarely had electricity or running water. When she was twelve, Florence's mother left the family to work in Cleveland and never returned.
Florence opens up about her childhood, as well as the challenges she's faced as an adult, including stage fright, postpartum depression, her extramarital affairs, divorce, her hearing loss, and heart problems. She writes with honesty and wisdom of how her faith and ability to survive has brought her through rough times to a life of profound joy and purpose.

Praise For Life Is Not a Stage: From Broadway Baby to a Lovely Lady and Beyond…

"If you think you know Florence Henderson-think again. Her journey is both inspirational and jaw dropping. She is one gutsy lady."—"Judge Judy" Sheindlin

"I count Florence as one of my dearest friends. Now I count her as one of my favorite story tellers. I have always loved the way she looks at life with humor and inspiration. This book proves that-in spades!"—Carol Burnett

"The teenaged Florence Henderson only needed a one-way ticket to Broadway when she left her hometown in Southern Indiana. The great Rodgers and Hammerstein quickly recognized in her what the rest of us would also soon discover -a big talent matched with an even bigger human spirit."—Bill Cosby

Florence Henderson is most well-known for her role as Carol Brady on TV's The Brady Bunch, but she started her career on the stage, in musicals such as Oklahoma! and South Pacific. She starred on Broadway in the long-running musical Fanny, and in 1962, she became the first woman to guest host The Tonight Show. Her talent for skit comedy also allowed her to make frequent appearances on Dean Martin's variety show. In 1968, she was cast as Carol Brady on the popular TV sitcom, which ran from 1968 to 1974, and is still on air today.