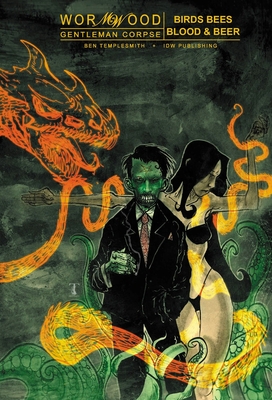 Ben Templesmith (30 Days of Night, Singularity 7, Fell) creates an all-eerie and humorous new series. Things are awakening in the city. Things that have a nasty habit of leaving mutilated bodies in their wake and it all reeks of demons and dark gods up to no good. Owing a favor to his lazy ghost cop buddy Trotsky, Wormwood, the gentleman corpse and his oddball entourage are brought in to investigate the case (or at least hopefully not stuff it up too much.)

Ben Templesmith is a New York Times best selling artist and writer most widely known for his work in the comic book industry where he has received multiple nominations for the International Horror Guild Awards as well as the industry's top prize, the Eisner Award. He also won a Spike TV Scream Award. As a creator, his most notable works have been 30 Days of Night (which spawned a major motion picture) and Fell. His other projects include the critically acclaimed serial Wormwood: Gentleman Corpse, as well as Welcome to Hoxford, and Singularity 7, all of which he also wrote.
Loading...
or
Not Currently Available for Direct Purchase