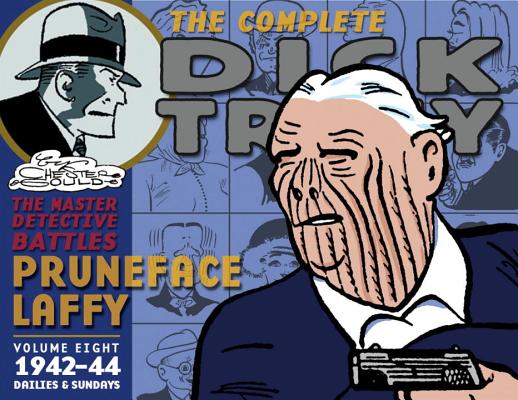 Chester Gould hits his stride, as he introduces four of his most grotesque villains: Pruneface, Laffy, Mrs. Pruneface, and Flattop! All while Dick Tracy is subjected to one of the most inventive and bizarre death traps in comics history.

Edited and designed by Dean Mullaney, Eisner Award-winner for Terry and the Pirates, and containing all daily and Sunday Dick Tracy comic strips from September, 1942 through March, 1944. "

Chester Gould (1900–1985) was born in Pawnee, Oklahoma, the son of a newspaperman and grandson of a circuit-riding preacher. He attended Oklahoma A&M (now Oklahoma State University) before transferring to Northwestern University in Chicago, from which he graduated in 1923. He produced the minor comic strips Fillum Fables and The Radio Catts before striking it big with Dick Tracy in 1931. Originally titled Plainclothes Tracy, the rechristened strip became one of the most successful and lauded comic strips of all time, as well as a media and merchandising sensation. He was twice accorded the “Cartoonist of the Year” Reuben Award by his peers. Gould continued to write and illustrate Dick Tracy until his retirement in 1977.
Loading...
or
Not Currently Available for Direct Purchase