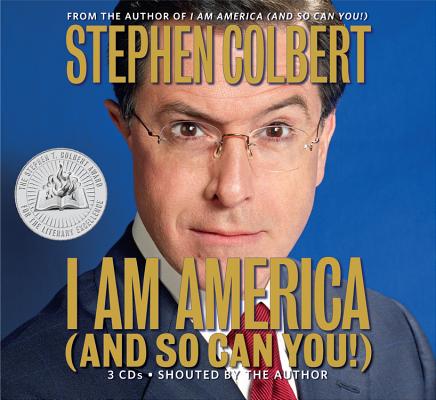 What The Daily Show is to evening news, The Colbert Report is to personality-driven pundit shows. Colbert brings his sarcastic charm to a half-hour report, tackling the important issues of the day and telling his guests why their opinions are just plain wrong. Stephen stands for truthiness and his American right to copyright that word and claim ownership of it.

I AM AMERICA the audiobook, features an all-American cast that includes Paul Dinello, Kevin Dorff, Greg Hollimon, Evie McGee, David Pasquesi, Amy Sedaris, Allison Silverman, Bryan Stack, and Jon Stewart. Stephen Colbert describes his audiobook as a simple audiobook from a simple mind--Stephen Colbert. It is one man's attempt to wedge his brain between hardback covers---in this case CD jackets. In plain conversational language, not to mention the occasional grunt and/or whistle, Stephen explains his take on the most pressing concerns of our culture: Faith, Family...Hygiene.

Why now? Stephen fears America has lost its balls and he hopes to re-ballify us. Even the ladies. Ladies can have balls--lady-balls too. Stephen likes to call those "Thatchers." Stephen will show how he got his mammoth swinging sack, with tales of courage and vital documents from his own life: the Mother's Day card he made at age six, disputed credit card bills, putt-putt score cards--all the major milestones.

Oh and don't buy this if you don't have any balls! But if you do buy it, you will get them, and then you can buy another copy with a clean conscience.

Jon Stewart is a comedian, writer, actor, producer, director, bestselling author and former host of The Daily Show. He lives with his wife and children in New Jersey.

Praise For I Am America (And So Can You!)…

Stephen Colbert's I Am America (And So Can You), narrated by Colbert with Paul Dinello, Kevin Dorff, Greg Hollimon, Evie McGee, David Pasquesi, Allison Silverman, Brian Stack and Jon Stewart and published by Hachette Audio. —Print This

I Am America (And So Can You!) is available both as a book and as a recording read by the author -- each serving as yin to the other's yang. Why try to imagine Colbert speaking the words on the page when, for a few dollars more, you can actually experience it?—Audio File
or
Buy Here
Copyright © 2020 American Booksellers Association