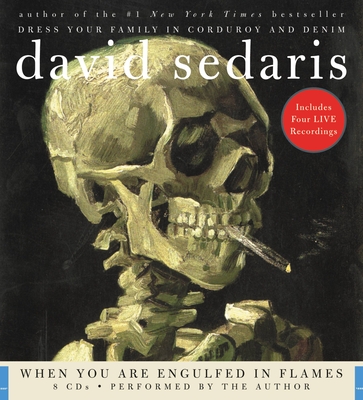 When You Are Engulfed in Flames (CD-Audio)

By David Sedaris, Author (Read by)

Once again, David Sedaris brings together a collection of essays so uproariously funny and profoundly moving that his legions of fans will fall for him once more. He tests the limits of love when Hugh lances a boil from his backside, and pushes the boundaries of laziness when, finding the water shut off in his house in Normandy, he looks to the water in a vase of fresh cut flowers to fill the coffee machine. From armoring the windows with LP covers to protect the house from neurotic songbirds to the awkwardness of having a lozenge fall from your mouth into the lap of a sleeping fellow passenger on a plane, David Sedaris uses life's most bizarre moments to reach new heights in understanding love and fear, family and strangers. Culminating in a brilliantly funny (and never before published) account of his venture to Tokyo in order to quit smoking, David Sedaris's sixth essay collection will be avidly anticipated.

David Sedaris lives in France and England. Raised in North Carolina, he has worked as a housecleaner and, most famously, as a part-time elf for Macy's. Several of his plays have been produced, and he is a regular contributor to Esquire and Public Radio International's "This American Life." His essays have been featured in The New Yorker and Harper's. He is the author of the books Dress Your Family in Corduroy and Denim, Barrel Fever, Naked, Holidays on Ice, and Me Talk Pretty One Day.

"The new book by renowned gay humorist David Sedaris is even better on CD; Sedaris reads the stories, and his comedic timing adds another layer of wit to the already hilarious prose."—L.A. Times
or
Buy Here
(This book is on backorder)
Copyright © 2020 American Booksellers Association