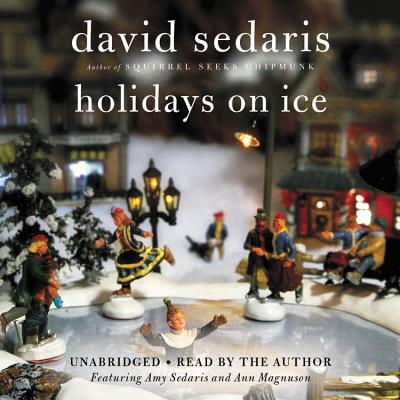 David Sedaris's beloved holiday collection is new again with six more pieces, including a never before published story. Along with such favoritesas the diaries of a Macy's elf and the annals of two very competitive families, are Sedaris's tales of tardy trick-or-treaters ("Us and Them"); the difficulties of explaining the Easter Bunny to the French ("Jesus Shaves"); what to do when you've been locked out in a snowstorm ("Let It Snow"); the puzzling Christmas traditions of other nations ("Six to Eight Black Men"); what Halloween at the medical examiner's looks like ("The Monster Mash"); and a barnyard secret Santa scheme gone awry ("Cow and Turkey").

No matter what your favorite holiday, you won't want to miss celebrating it with the author who has been called "one of the funniest writers alive" (Economist).

Praise For Holidays on Ice…

"...Sedaris has as much fun as is humanly (or elfishly) possible in his behind-the-scenes look at this particularly American tradition of sitting on Santa's lap and asking for stuff...Part of the fun is hearing the reaction of the New Yorkers who have to wait in line, pay for Santa photos, and generally go mad in the Christmas frenzy that Macy's embodies. And Sedaris, never quite who he seems to be, has the nasty tone of his commentary down perfectly."

David Sedaris is a regular contributor to The New Yorker and Public Radio International's "This American Life." He is the author of the books Dress Your Family in Corduroy and Denim, Me Talk Pretty One Day, Naked, and Barrel Fever.