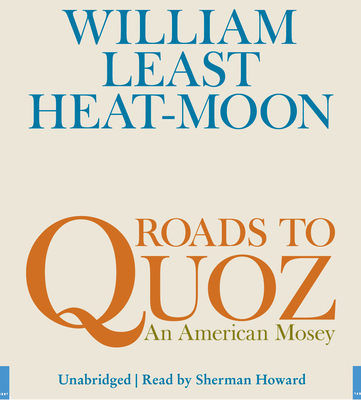 About a quarter century ago, a previously unknown writer named William Least Heat-Moon wrote a book called Blue Highways. Acclaimed as a classic, it was a travel book like no other. Quirky, discursive, endlessly curious, Heat-Moon had embarked on an American journey off the beaten path. Sticking to the small places via the small roads -- those colored blue on maps -- he uncovered a nation deep in character, story, and charm. Now, for the first time since Blue Highways, Heat-Moon is back on the backroads. Roads to Quoz is his lyrical, funny, and touching account of a series of American journeys into small-town America.

William Least Heat-Moon is the author of the bestselling classics Blue Highways, River-Horse, and PrairyErth. He lives near Columbia, Missouri.

Praise For Roads to Quoz: An American Mosey…

"Narrator Sherman Howard perfectly delivers the author's saunter through the states. Howard's untroubled, unhurried exposition allows the listener to bask in the splendid descriptions (sometimes overdone) descriptions of 'all things Quoz-things strange, incongrous, or peculiar"It's like sitting on Grandpa's knee or hearing the ghost of Charles Kuralt exulting in all the wonderful tiny things that make up the fabric of America."