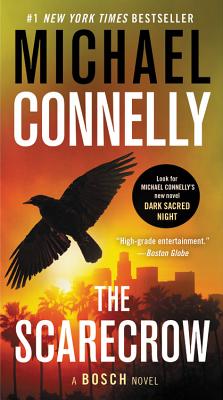 Forced out of the Los Angeles Times amid the latest budget cuts, newspaperman Jack McEvoy decides to go out with a bang, using his final days at the paperto write the definitive murder story of his career.

Jack is soon running with his biggest story since The Poetmade his career years ago. He is tracking a killer who operates completely below police radar--and with perfect knowledge of any move against him. Including Jack's.

Praise For The Scarecrow (Jack McEvoy)…

"Narrator Peter Giles delivers the crisp and compelling copy with a deadpan tone and a pace that advances like Patton through Italy. Scenes involving the stalking of McEvoy and Walling raise hairs at the back of the listener's neck. Great characters and a satisfying ending cement Connelly's place as one of the best crime novelists working today."
—AudioFile, -

Michael Connelly is the bestselling author of the Harry Bosch series of novels as well as The Poet, Blood Work, Void Moon, Chasing the Dime, and the #1 "New York Times "bestseller "The Lincoln Lawyer." He is a former newspaper reporter who has won numerous awards for his journalism and his novels. He spends his time in California and Florida.
Loading...
or
Not Currently Available for Direct Purchase