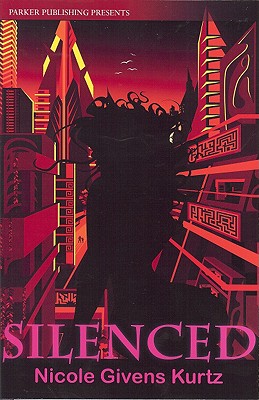 In the year 2146, the United States has completely collapsed, leaving the country in ruins. In this turmoil, Cybil Lewis and her inspector-in-training, Jane, fill a need. When begged by Jane to look into the disappearance of Jane's cousin, Bybil is catapulted into a world far removed from anything she has experienced so far-a world of lies and deceit. As they investigate, they move far into the reaches of the divided states and eep into the upper crest of political turmoil. Relectantly caught up in a world of betrayal and corruption, Cybil and Jane unearth long buried secrets and survive attempts on their lives. As they move closer to the truth, they discover that the people, who are entrusted with the safety of the territories, will do anything to keep their secrets, including murder. Especially murder. Cybil and Jane will do what they must to get to the truth. They will never be SILENCED.

Nicole Givens Kurtz writes science fiction, fantasty, romance, and urban fantasy. She lives in North Carolina and was a former teacher at the University of New Mexico, Gallup. Her science fiction novels have been named as finalist in the 2006 Fresh Voices in Science Fiction (Zephyr Unfolding), EPPIE Finalist in Science Fiction (Browne Candidate) and DREAM REALM Finalist in Science Fiction (Browne Candidate). Her short stories have appeared in such noted publications as Anotherealm, Tales of the Talisman, Orpheus Romance and Wild Child Press. In addition to fiction, her nonfiction articles have appeared in AFRIQUE Newsmagazine as well as Moondance, and ePregnancy. Nicole is a member of the Carl Brandon Society and a member of the National Association of Women Writers. Please visit Ms. Kurtz at www.nicolegivenskurtz.com
or
Not Currently Available for Direct Purchase