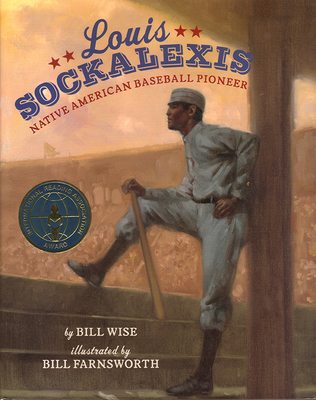 A biography of Louis Sockalexis, Penobscot Indian and the first Native American to play professional baseball, focusing on his formative years and culminating in an historic game at New York's Polo Grounds in 1897.

On a Maine summer day in 1884, twelve-year-old Penobscot Indian Louis Sockalexis first fell in love with baseball. As he grew up, Louis honed his skills and dreamed of one day joining a major league team.

Louis encountered opposition at every turn-from the jeers of teammates and the taunts of spectators who thought he had no place in a white man's sport to the disapproval of his father, who wanted Louis to focus on tribal life. Louis finally made it to the major league Cleveland Spiders, but racism followed him, until one momentous day in June 1897 at New York's Polo Grounds. Facing off against the most feared pitcher in baseball, Louis proved he belonged in the sport.

Here is the inspiring story of a boy who dared to make his dream a reality. With determination, courage, and quiet dignity, Louis Sockalexis smashed racial barriers and home runs, leaving an indelible mark on America's favorite sport.

BILL WISE, an avid baseball fan, first heard about William Hoy when he was a child. Years later, after further research, Wise was inspired to bring Hoy's remarkable story to young readers. Wise and his family live in Gorham, Maine.
or support indie stores by buying on
Copyright © 2020 American Booksellers Association