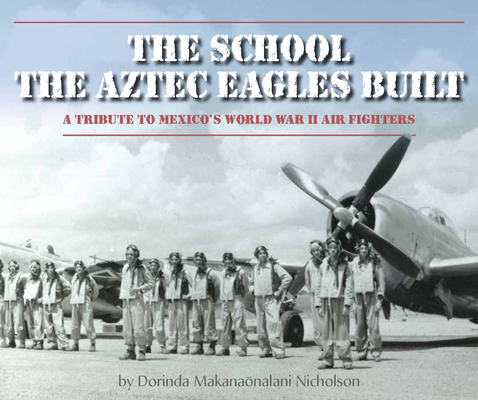 The School the Aztec Eagles Built

A photo-illustrated book about the Aztec Eagles, Mexico's World War II Air Force squadron interwoven with the story of Sergeant Angel Bocanegra, whose service was rewarded with the building of a school in his village.

In May 1942, German U-boats torpedoed two unarmed Mexican oil tankers off the Gulf Coast, forcing Mexico to enter World War II. With the help of United States President Roosevelt, Mexican President Camacho arranged to send one Air Force squadron to fight in the war. Thirty-eight of Mexico's top pilots, and about two hundred sixty additional military crew were carefully selected to form the 201st Air Force Squadron, also known as the Aztec Eagles. The squadron was the first unit in history to leave Mexico on a fighting mission.

To mark this historic event, President Camacho asked the men if they had any last minute requests before they went to war. Sergeant Angel Bocanegra, a former teacher and now squadron ground crewmember, stepped forward and made a request. He asked that a school be built in his small village of Tepoztlan.

The School the Aztec Eagles Built tells the exciting story of how a Mexican Air Force squadron and an unknown schoolteacher made their mark in history.


Praise For The School the Aztec Eagles Built…

DORINDA MAKANAŌNALANI NICHOLSON was born in Hawai’i and was an eyewitness to the attack on Pearl Harbor when she was six years old. She believes it is her mission to bring World War II history to life for children. Her works have received starred reviews and awards, including the IRA Children’s Book Award for nonfiction, Benjamin Franklin Award, and ALA Notable. The School the Aztec Eagles Built has already garnered the SCBWI Book Launch Award for 2012. In addition to being a writer, Nicholson is a Missouri Humanities Council member and avid hula dancer. She and her husband live in Raytown, Missouri.