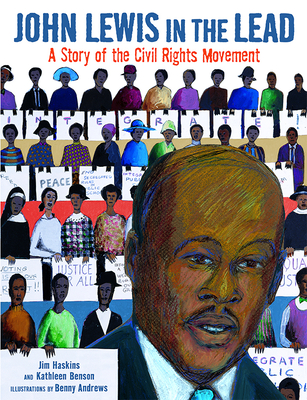 John Lewis in the Lead

A Story of the Civil Rights Movement

A biography of John Lewis, one of the Big Six civil rights leaders of the 1960s, focusing on his involvement in Freedom Rides, the March on Washington, and the march across the Edmund Pettus Bridge from Selma to Montgomery, Alabama.

How does an Alabama sharecropper's son grow up to help change his world? For John Lewis the journey began as a boy experiencing the injustice of segregation and the inspiring words of Dr. Martin Luther King Jr.

After high school Lewis joined with Dr. King and other civil rights leaders who believed in fighting segregation peacefully. From Nashville, Tennessee, to Selma and Montgomery, Alabama, Lewis was in the forefront of the major civil rights protests of the 1960s. In the face of physical attacks, he perservered with dignity and a devotion to nonviolence, helping southern black people gain the right to vote. Lewis continued his commitment to human rights with words and action from his home base in the South, straight to the nation's capital. In 1986 John Lewis was elected to represent Georgia in the United States Congress, where he continues to serve today.

John Lewis in the Lead celebrates the life of a living legend of American history. Lewis's passionate belief in justice is a beacon for all who wish to make the country a better place to live.

JIM HASKINS was the celebrated author of more than one hundred books, most on topics of African American history and achievement. His works received numerous honors, including the Coretta Scott King Author Award and the Carter G. Woodson Award. In 1994 Haskins was the recipient of the Washington Post Children's Book Guild Award for a body of work in nonfiction for young people. KATHLEEN BENSON long served as the Curator of Community Projects at the Museum of the City of New York. With her late husband, Jim Haskins, she co-authored some twenty books for children, young adults, and adults. She lives in New York City. You can find her online at kathleenbenson.com. Benny Andrews (1930-2006) was a renowned African American fine artist whose work is in the permanent collections of more than thirty major museums, including the Smithsonian Institution, the High Museum of Art in Atlanta, and the Metropolitan Museum of Art in New York City. His dramatic, folk art-style illustrations have also appeared in several children's books. He passed away in 2006.
Loading...
or support indie stores by buying on