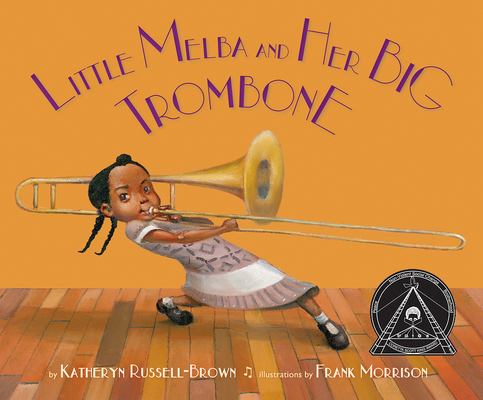 Little Melba and Her Big Trombone

A biography of African American jazz virtuoso Melba Doretta Liston, a pioneering twentieth-century trombone player, composer, and music arranger at a time when few women, of any race, played brass instruments and were part of the jazz scene.

Melba Doretta Liston loved the sounds of music from as far back as she could remember. As a child, she daydreamed about beats and lyrics, and hummed along with the music from her family's Majestic radio.

At age seven, Melba fell in love with a big, shiny trombone, and soon taught herself to play the instrument. By the time she was a teenager, Melba's extraordinary gift for music led her to the world of jazz. She joined a band led by trumpet player Gerald Wilson and toured the country. Overcoming obstacles of race and gender, Melba went on to become a famed trombone player and arranger, spinning rhythms, harmonies, and melodies into gorgeous songs for all the jazz greats of the twentieth century: Randy Weston, Duke Ellington, Count Basie, Billie Holiday, and Quincy Jones, to name just a few.

Brimming with ebullience and the joy of making music, Little Melba and Her Big Trombone is a fitting tribute to a trailblazing musician and a great unsung hero of jazz.

Katheryn Russell-Brown is a Professor of Law and the Director of the Center for Race and Race Relations at the University of Florida. She grew up in a family of music lovers, where jazz was an integral part of the sounds of daily life. A radio broadcast in 2008 about Liston inspired Russell-Brown to research the musician and eventually to write Little Melba and Her Big Trombone, her first picture book. Russell-Brown lives in Gainesville, Florida, with her family. Visit her online at krbrown.net. Frank Morrison has illustrated numerous award-winning books, including the Coretta Scott King Illustrator Honor winner Little Melba and Her Big Trombone, published by Lee & Low Books. Before becoming an illustrator, Morrison was a graffiti artist and b-boy. Morrison lives with his family in Georgia. You can learn more about him at morrisongraphics.com.
Loading...
or support indie stores by buying on