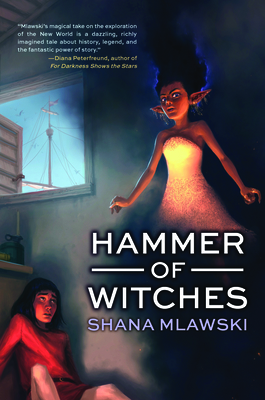 In this YA historical fantasy, a teen from Spain finds himself aboard a ship sailing to the New World with Christopher Columbus.

Baltasar Infante, a bookmaker's apprentice living in 1492 Spain, can weasel out of any problem with a good story. But when he awakes one night to find a monster straight out of the stories peering at him through his window, he's in trouble that even he can't talk his way out of.

Soon Baltasar is captured by a mysterious arm of the Spanish Inquisition, the Malleus Maleficarum, that demands he reveal the whereabouts of Amir al-Katib, a legendary Moorish sorcerer who can bring myths and the creatures within them to life. Baltasar doesn't know where the man is-or that he himself has the power to summon genies and golems.

Baltasar must escape, find al-Katib, and defeat a dreadful power that may destroy the world. As Baltasar's journey takes him into uncharted lands on Columbus's voyage westward, he learns that stories are more powerful than he once believed them to be-and much more dangerous.