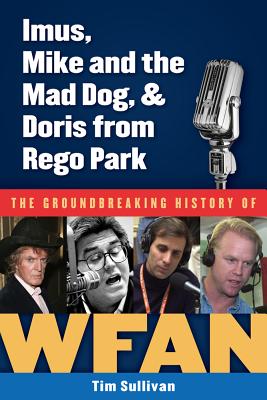 Imus, Mike and the Mad Dog, & Doris from Rego Park

The Groundbreaking History of WFAN

A behind-the-scenes look at the most powerful voices on New York’s AM dial, this is the all-encompassing history of WFAN. Created in 1987, WFAN was the nation’s first 24-hour, all sports radio station and this work recounts how, a quarter-century later, it is the highest-rated station in New York and the home to many unforgettable radio personalities past or present, including Don Imus, Chris “Mad Dog” Russo, Mike Francesa, and Boomer Esiason. Seasoned journalist Tim Sullivan provides an account that soaks itself in the history, impact, egos, fans, and all the controversies of WFAN, making it an enthralling read for any sports fan.

Tim Sullivan is a sports and hockey editor for the Associated Press and a regular contributor to the Fox Television family of networks. He is the author of Battle on the Hudson and is a former columnist for the New York Post. He lives in Fair Haven, New Jersey. Steve Somers, a.k.a., “The Schmoozer”, is truly a “FAN original”, having been an on-air fixture on WFAN since the station debuted on July 1, 1987. He lives in Manhattan.